Taylor Swift released the music video for her track ‘Bejeweled’ on Tuesday, October 25. 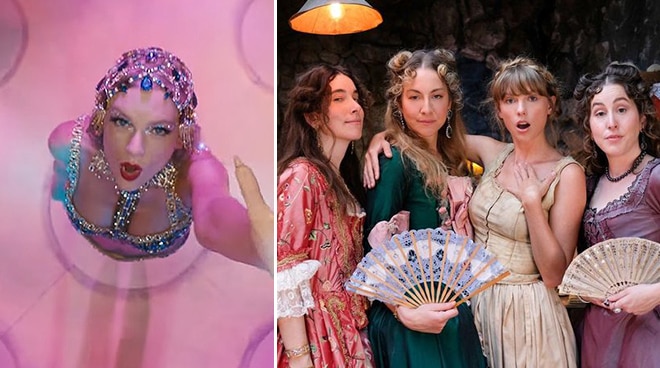 Taylor Swift has released the second music video off of her 10th studio album Midnights.

The global pop star premiered the music video for her track "Bejeweled" on Tuesday, October 25.

In an Instagram post prior to the release of the video, Taylor explained that the music video featured her take on a classic fairytale.

"Midnight, what a storied and fabled hour... On this sparkling evening I'll be releasing my twist on a fairytale we all know. The one about the girl and her step sisters and the clock striking 12," she shared.

Taylor remarked that she dedicates the music video to her supporters saying, "This video is wild, whimsical and created SPECIFICALLY for you, my beloved fans who have paved this shimmering path. Look out for some dazzling cameos!"

In an interview on Tonight with Jimmy Falon before the music video premiere, Taylor shared how she came up with the concept for  the video of "Bejeweled."

"Basically the first video 'Anti-Hero' I was like, 'This is going to be the first single' and I knew that but I want to make a video that is just for the fans who like certain things like glitter and easter eggs and lots of little cameos so basically I was thinking about midnights, the concept. What do we hear about midnights a lot? We hear about it a lot when we talk about the Cinderella fairytale. So what if we did a little twist on a Cinderella story and I can cast my friends," she relayed.

Featured in the music video is Oscar winner Laura Dern, who plays the stepmother in the video. Other cast members of the music video are HAIM, Jack Antonoff, Dita Von Teese, and Pat McGrath.

Taylor released her album Midnights on October 21. The album made history on Spotify on its first day.

Taylor collaborated with Jack for Midnights. The singer penned a post for her collaborator on the release day of the album.

"Midnights is a wild ride of an album and I couldn’t be happier that my co-pilot on this adventure was @jackantonoff. He’s my friend for life (presumptuous I know but I stand by it) and we’ve been making music together for nearly a decade HOWEVER… this is our first album we’ve done with just the two of us as main collaborators," she said on release day.

In her post, Taylor also shared that they created the Midnights album by revisiting the various midnight stories in their lives.

She shared, "We’d been toying with ideas and had written a few things we loved, but Midnights actually really coalesced and flowed out of us when our partners (both actors) did a film together in Panama. Jack and I found ourselves back in New York, alone, recording every night, staying up late and exploring old memories and midnights past," she relayed.

Taylor remarked that Midnights is "a collage of intensity, highs and lows and ebbs and flows. Life can be dark, starry, cloudy, terrifying, electrifying, hot, cold, romantic or lonely. Just like Midnights."