Gabby Padilla is thankful to work with Iza Calzado in ‘K-Love’: ‘She’s like a big sister to me!’

‘K-Love’ actress Gabby Padilla reveals how she felt being offered her biggest acting project to date in the latest Viu Original series. 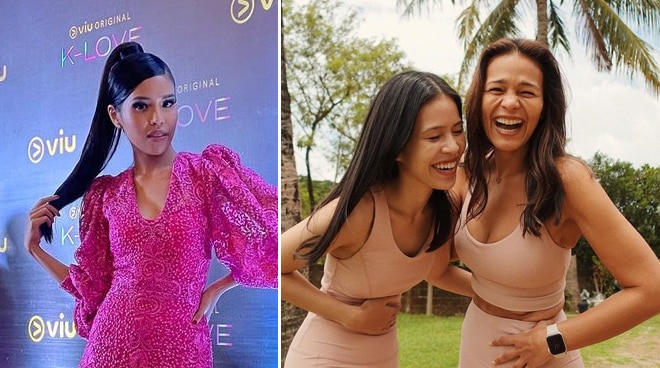 After being part of the 2019 film Dead Kids as well as starring in the 2018 indie film Billie and Emma, Gabby Padilla counts her latest role as the quirky and smart Frances in the Viu Original series K-Love as her biggest break in showbiz to date.

“Hindi pa natatapos yung pitch nila and I was like, ‘yes!’ and I couldn’t fathom how big of a project this was. I didn’t want to jinx it, I didn’t want to talk about it with anyone because I was scared if I mentioned it or if I said it out loud I would jinx it. Because that was how unimaginable it was to me. And at the end of the day, I knew that I could trust Viu. I worked with them before and I knew that I wanted to work with these people, to work with people I’ve just been watching growing up, and to have this opportunity,” she said.

In Viu’s new K-drama-inspired series, Gabby plays the role of a woman named Frances who is the product of the ideal happy family and holds very high standards for guys, always aiming for that ultimate "oppa" she sees while watching South Korean dramas. Gabby’s co-stars include  Iza Calzado, Isabelle Daza, Sue Ramirez, and Jake Cuenca.

Apart from getting the chance to work with a stellar cast, Gabby is also thankful to have found a big sister through the show.

“I didn’t want to speak of this project until it was finally happening, until I had the script in my hand because it was such a big opportunity for me and I knew it was such a privilege to even be in this room and to play this character. It was daunting but I think what made the experience was to have a really solid support system in this team, with the rest of the cast. Ate Iza, she’s like a big sister to me. Just add water nga yung relationship namin (laughs). So I think that’s what made this whole experience much easier was that everyone was just so kind and gentle and supportive with each other and I think it will show on screen,” she admitted.

READ: Iza Calzado says no to heavy drama while pregnant: ‘I don’t want that kind of energy for the child’

K-Love is now available for streaming on Viu. Enjoy a wide variety of the latest Korean dramas and variety shows, anime, Thai, Japanese and Chinese dramas, Viu Originals and #TagDubonViu. Download the Viu app now and watch the best of premium Asian entertainment for free.