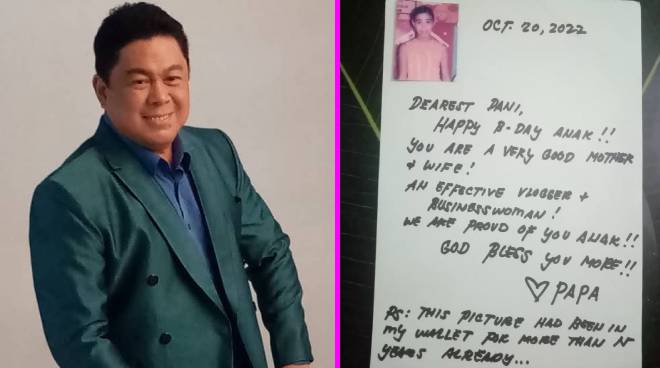 Amid the ongoing rift between Dennis Padilla and his estranged children with Marjorie Barretto, the comedian penned a message in time for his former stepdaughter Dani Barretto’s birthday.

Dennis stood in as Dani’s father back when he and Marjorie Barretto were still together.

In an Instagram post, Dennis took a photo of a greeting card with a heartfelt message he penned for Dani.

“Dearest Dani, Happy B-Day anak! You are a very good mother and wife! An effective vlogger and businessman. We are proud of you anak. God bless you more! Papa,” Dennis wrote.

He went on to share that he had kept for a decade-and-a-half the photo of Dani on the greeting card. “PS. This picture has been in my wallet for more than 15 years already.”

Dennis and his children with Marjorie — particularly Julia and Leon — had been involved in a word war on social media in recent months.

“I’ll be very honest. We have not spoken and it’s because there’s just so much fear inside me. I’m really scared,” Julia revealed in an interview with Karen Davila.

In the same interview, Julia admitted she finds it hard to forget the things Dennis had done to her and her family.

“I think it’s not difficult for us to forgive. But it’s difficult to really just… It’s not the forgiveness, it’s to forget. It’s also just, there’s a lot of fear because I don’t know what’s going to happen. But forgiveness, of course, definitely,” she said.

Julia went on to clarify that she wants to forgive Dennis but is just not ready yet.

“That’s for my own peace of mind, di ba? Hindi ko ipagkakait ang forgiveness but I’m just not that ready. There’s just been so much pain over the years since I was young. So parang I got tired of the same thing,” she remarked.

Back in June, Leon penned an open letter for Dennis Padilla.

“Papa, why does it seem like you enjoy hurting your kids in public? Why do you keep posting cryptic posts about us and allow people to bash us on your own Instagram page? Do you think it does not pain all of us to not feel protected by their own father?” he asked.

“I long for the day when I can greet you a ‘Happy Father’s Day’ and know that it comes from a place of gratitude and healing,” he said.

Dennis has three children with Marjorie—Julia, Claudia, and Leon.