Actress and ‘Darna’ star Janella Salvador proved she is indeed the ‘Mother of Serpents’. 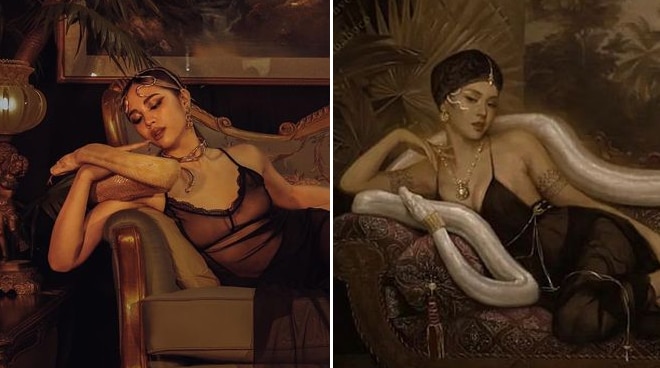 Actress Janella Salvador proved she is indeed the Mother of Serpents as she posed with a live snake in her latest photo shoot that recreated a local artwork.

It sees the actress posing with a live albino snake while dressed in a sheer black dress and snake-inspired metallic pieces around her head and neck.

Aside from Mike, Janella credited local artist Denver Balbaboco for inspiring the pictorial with his “beautiful” Valentina artwork.

Balbaboco first released his digital portrait of Valentina in January, two months after it was announced that Janella would play Valentina in Mars Ravelo’s Darna starring Jane de Leon.

“This portrait of the villain Valentina is inspired by the glamour of the old Hollywood stars Marlene Dietrich and Elizabeth Taylor,” Balbaboco said of the artwork, which imagines Janella as the iconic serpent queen.

“She wears a slip dress and a turban, both created from sheer fabrics that erotically embrace her body's curves. Valentina also wears an old Philippine Jewelry called tamburin. Her native batok tattoos represent the elements of a snake.”

He added: “I have adapted the concepts of the Darna films of 1991 and 1994, where Pilar Pilapil's elite Valentina and Cherie Gil's televangelist Valentine harnessed the power and the charisma of the Snake; luring people into darkness and promising them false salvation from the horrors of the volcanic eruptions.”