Ken Anderson’s short film wins at the Manhattan International Film Festival: ‘I’m just the kid from Mindanao with a dream’ 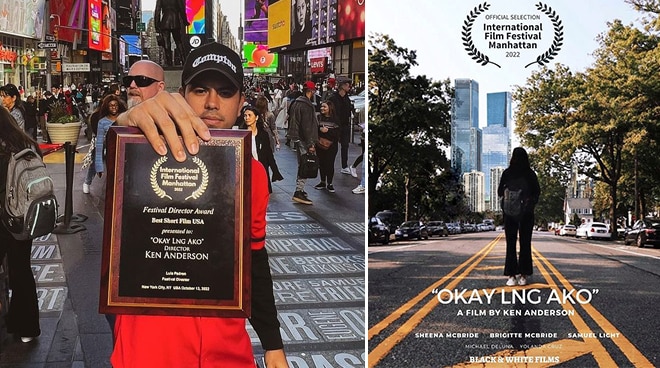 After making his directorial debut with the 2019 horror film Lola, Gerald Anderson’s younger brother Ken achieved his first directing award at the International Film Festival Manhattan in New York City where he won Best Short Film for Okay Lng Ako which is about a Pinay OFW’s life in the US.

In his Instagram post last October 16, Ken shared photos of his first international award for directing. He wrote, “First of all what an honor to win this award. I want to say thank you to everyone involved in the Manhattan International Film Festival. I want to say thank you for allowing filmmakers like me to showcase their art to the world. Of course I want to thank my partner in crime, you’re an amazing actor. Keep aiming high. I love you. At the end of the day, I’m just the kid from Mindanao with a dream… on to the next project.”

READ: EXCLUSIVE: Ken Anderson on supporting his brother Gerald through intrigues: ‘We make sure that he has a good support group’

In 2020, Ken revealed to PUSH that he was looking forward to directing Gerald in a project someday after returning to the Philippines to study filmmaking at the South Asian Pacific Institute. “I’ve always had a passion naman for filmmaking eh. I’ve always wanted to be a director deep inside. And I thought na since medyo I’m older na, I think now is the time to pursue it,” he shared.