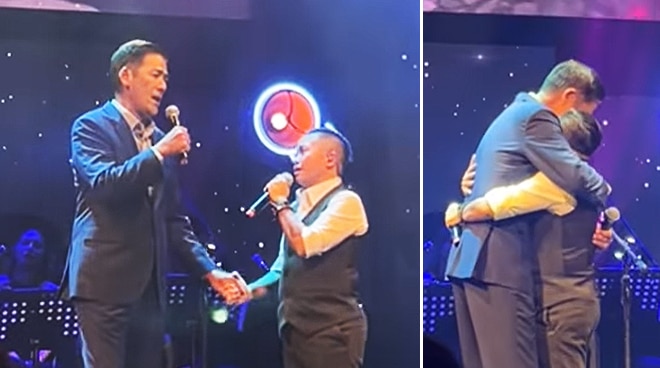 “This made me cry,” said Pauleen Luna of the emotional moment shared by her husband Vic Sotto and Ice Seguerra during the latter’s concert.

Pauleen Luna could not help but be moved as her husband Vic Sotto and singer Ice Seguerra shared an emotional moment during the latter’s “Becoming Ice” concert held last Saturday, October 15.

The actress-host took to Instagram to share a clip of the touching performance as she congratulated Ice, her good friend, for a successful show.

“This made me cry. Growing up, I watched you and Vic be a tandem on screen but what people don’t know is the relationship you have when no one is watching. Sabi mo nga last night, father and son,” wrote Pauleen.

“As you know, Vic isn’t the most ma-PR person in the world and that makes you more special cos I see how he values you and treats you like his own. He loves you so much and I am so blessed to witness it,” she added.

“Kidding aside, watching you pour out you heart and soul last night, made me realize what a bigger star you are. On stage and off stage. Kung magmahal ka, kahit tao man yan o craft o ano man, you give your all. Kaya we are so blessed to have you in our lives @iceseguerra! Congratulations! Iba ka!!!!” she continued.

READ: Ice Seguerra excited to have Regine Velasquez be a guest at his concert: ‘Na windang ako ng bongga!’

Vic and Ice have known each other since Ice was just three years old. The latter joined the “Little Miss Philippines” segment of “Eat Bulaga!” in 1987. He would go on to become part of the show until 1997 and be a close collaborator of Vic for many years.

In fact, Ice has played Vic’s child in many of the veteran comedian’s films, including the Okay Ka, Fairy Ko! and Enteng Kabisote series. The two most recently collaborated for the Metro Manila Film entry Enteng Kabisote 10 and the Abangers in 2016.

Ice, 39, held his “Becoming Ice” concert to celebrate his 35th anniversary in the entertainment industry. The show was held at The Theater at the Solaire last October 15, and directed by Ice himself.

Aside from Vic, other guest stars featured in his concert were singers Regine Velasquez, Martin Nievera, Chito Miranda, Juris, and Sitti.