The much-awaited teaser for the South Korean show “Knowing Bros” has finally been released. 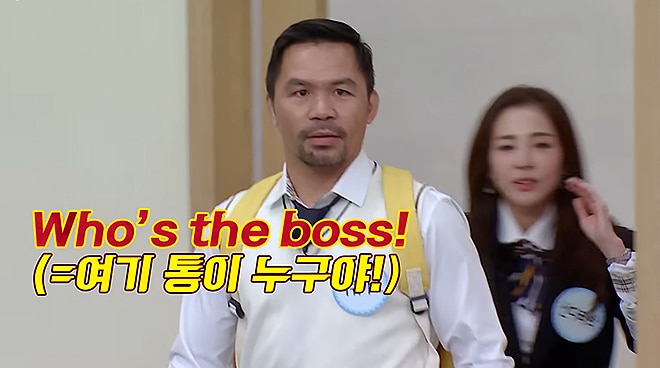 South Korean variety show Knowing Bros gave Manny Pacquiao’s fans a glimpse of what they can expect from the show.

JTBC Entertainment, in a video uploaded on their YouTube channel, revealed that the Filipino boxer’s episode will air on October 22.


Joining the Pambansang Kamao is K-Pop star and Pambansang Krung Krung Sandara Park who will appear alongside him in the show.

In the teaser, Manny can be seen donning the show’s iconic school uniform. The show takes on a high school classroom setting wherein the hosts interview the guests in the first part of the show.

“Who’s the boss here? [Are] you the boss?” Manny asked the hosts of the show.

The boxer can be seen dueling it out with the show's hosts which include some of South Korea’s former athletes such as Kang Ho-dong and Seo Jang-hoon during the latter part of the teaser.

The teaser also showed a glimpse of Sandara translating some Filipino words answered by the Filipino boxer. Fans of the K-pop star and Manny shared their excitement over the unexpected collaboration between the two global personalities.

Aside from the two, K-pop idol Kim Yohan of the boy band WEi will also make an appearance in the same episode.

Manny is currently doing promotional activities in the Land of the Morning Calm for his upcoming exhibition match with Korean YouTuber DK Yoo which is slated to happen on December 11.