Manny Pacquiao will also be appearing on ‘Knowing Bros’ 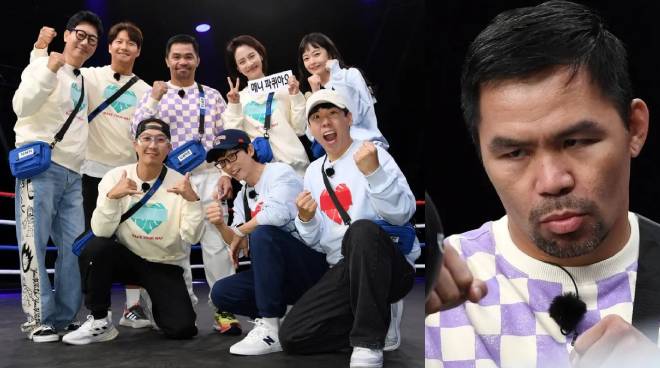 Filipino boxer and politician Manny Pacquiao will be guesting in some of the biggest variety shows aired in South Korea––Running Man and Knowing Bros. The official social media account of Running Man shared glimpses of the Filipino athlete’s episode.


The episode will be aired on October 23.

In the photos shared by the staff of the longest South Korean variety show, Manny can be seen interacting with the members. The athlete-turned-politician was also seen having a sparring session with Running Man’s Kim Jong-kook.

“[Running Man×Pacquiao] The best ever meeting✨️ Finally received it in person.. Members and crew are all in fan mode 👉👈 The best race ever with 'legend boxer' Manny Pacquiao 🥊 See you on the 23rd,” the translated caption reads.

On Manny’s Facebook page, he showed a video of the sparring match between him and Kim Jong-kook while the other cast members were showing their support for their member. Netizens showed their excitement over the boxer’s guesting on the South Korean variety shows.

LOOK: Manny and Jinkee Pacquiao visit ‘Crash Landing On You’ location in Switzerland

Meanwhile, Sandara Park is set to guest alongside Manny in Knowing Bros. The former 2NE1 member shared on her Instagram stories how she couldn’t wait to see Manny again. No official date has been released yet for Manny’s episode with the show.

This isn’t the first time Manny has guested in a South Korean variety show. He was first seen on the now-defunct show, Infinite Challenge back in 2017.

Manny is doing different collaborations in South Korea to promote his upcoming exhibition match with Korean YouTuber DK Yoo which is slated to happen on December 11.