Maymay Entrata got nominated for Best Asia Act alongside TOMORROW x TOGETHER, NIKI, SILVY, and THE RAMPAGE from EXILE TRIBE. 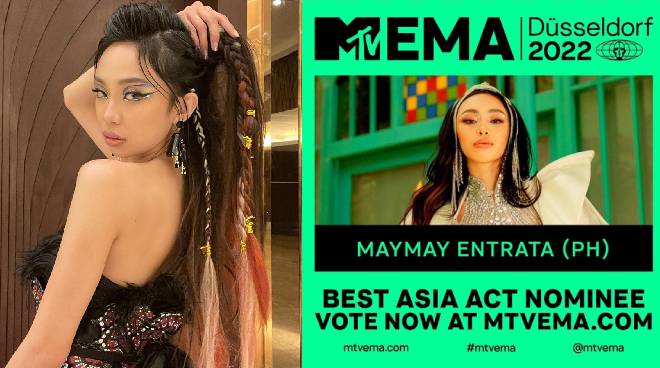 Maymay Entrata has been nominated for this year's  MTV Europe Music Awards (EMA).

The Kapamilya star is one of the nominees for the Best Asia Act category. Maymay got nominated alongside TOMORROW x TOGETHER of South Korea, NIKI of Indonesia, SILVY of Thailand, and THE RAMPAGE from EXILE TRIBE of Japan.

"Time for you and your fav to make history!  Vote for your fav nominee now and they might be your 2022's MTV EMA Best Asia Act!" MTV posted.

Following her nomination, Maymay took to social media to express her gratitude to MTV EMA.

"A huge thank you po to @mtvema for recognizing my song and giving me the privilege to be with the other amazing artists, nominated in this category! " she said.

She also extended her gratitude to her fans for the support they have been showing her throughout the years.

"At shempre to my @starpopph family maraming salamat at congratulations po sa atin  Please support and vote for me, Kindly click po the link in my bio," she wrote.

Fans also took to social media to congratulate Maymay for this new feat in her career.

"Congrats may may more more blessing at projects," another fan commented.

Maymay’s single "Amakabogera" became a trending song on various social media channels since it was released.

The singer released the song back in October 2021.

The music video for "Amakabogera" has already gained more than 17 million views on YouTube as of this writing.

Her most recent live performance of the song was during the Binibining Pilipinas 2022 coronation night last July 31 at the Smart Araneta Coliseum.