Liza Diño met some of the biggest actors in South Korea and netizens couldn’t help but feel envious. 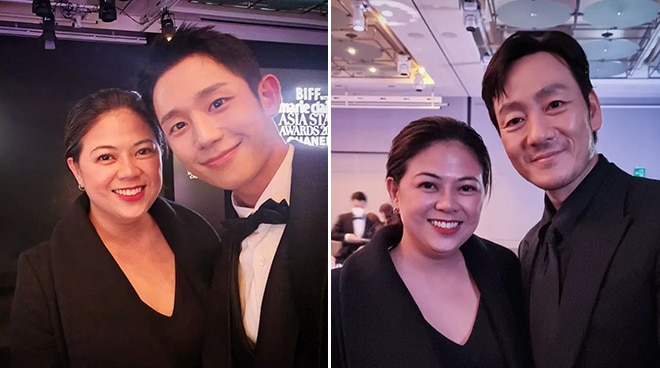 Former Film Development Council of the Philippines (FDCP) chair Liza Diño shared some photos of her interaction with some of South Korea’s biggest actors.

On Instagram, she proudly showed off her photos with Squid Game actor Park Hae-soo and Snowdrop leading man Jung Hae-in.

She is currently in South Korea to attend the Busan International Film Festival.

“Jung Hae-in at the Marie Claire Asia Star Awards. He took my phone and said, ‘Let me take our selfie.’ Aww, super nice niya,” she recalled.

In a separate post, Liza noted that she is still trying to get to know the names of the Korean actors.

“Not yet as familiar with Korean stars but I've seen Squid Game so yeah, hello there Park Hae-soo,” she added.

Netizens commented on how envious they felt over the former FDCP chair’s encounter with their idols. Celebrities such as Sylvia Sanchez and Arlene Muhlach also expressed that they feel jealous of Liza.

Liza’s visit to Busan is her first international work trip as a former chair of the FDCP. She is there to represent the young producers of the country and is serving as an industry mentor in the film industry.

In a previous post, Liza shared that despite her no longer holding any position at FDCP, she still wanted to put the interests of young filmmakers first.

“As I officially take on the next chapter of my life, still doing what I love---championing Philippine cinema in the global space---- I take with me the hopes and dreams of the Filipino filmmakers I now represent to make global quality projects that will take us to the next level,” she previously wrote.