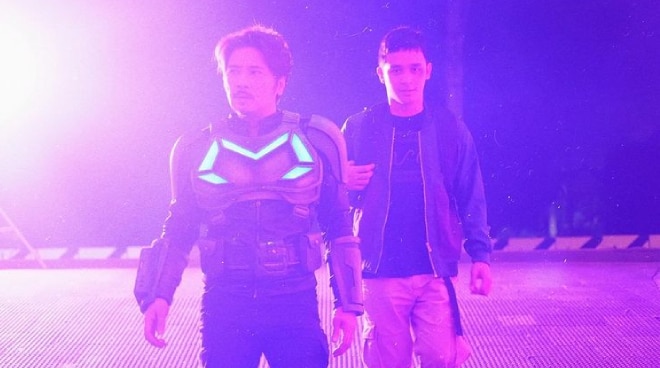 As part of the cast of the new Pinoy superhero film Mang Jose, MIkoy Morales said he feels lucky to be able to work alongside veteran actor Janno Gibbs who plays the title role of the superhero-for-hire in the latest Vivamax film.

“It was at first honestly quite intimidating kasi first time namin magkatrabaho eh. But ang bilis din naman nawala yun kasi ang bilis maramdaman sa kanya yung bait niya, yung puwede maging comfortable at yung mag-push na puwedeng mag-collaborate into make this the best that we can. Hindi ko masasabi na pressure pero for almost the entire time, majority of the scenes kami ang magka-work together so parang may push na I was always on my feet and always na-cha-challenge ako eh. Ang kapal ng collaborative atmosphere so meron dun yung hindi ka puwedeng makampante talaga. It wasn’t just another project. It felt like something that was really ours because of how he was on the set, how he was towards me and to the team and everyone else. Milestone sa akin ito,” he recalled.

Playing the role of Bing Loyzaga’s son in the film, Mikoy hires the services of Mang Jose (Janno Gibbs) in order to rescue her from the Turborats army of King Ina (played by Manilyn Reynes). Working with screen veterans was also an enjoyable experience for the actor.

When asked to share his favorite moment while doing the film, Mikoy said it was actually the dramatic scene that he loved doing the most.