Lee Min-ho has nothing but love for his ‘The Heirs’ co-star Park Shin-hye. 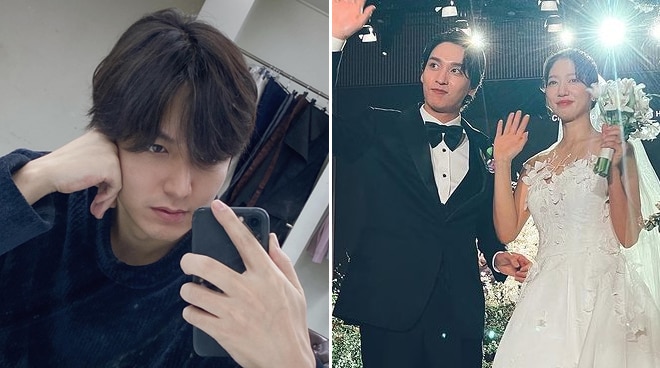 Lee Min-ho congratulated his co-star on the hit South Korean drama The Heirs Park Shin-hye on tying the knot with Choi Tae-joon.

The couple got married in a ceremony in Seoul ON January 22.

Min-ho, who was among those in attendance at Shin-hye’s wedding, shared a selfie of himself wearing a suit.

“Do I congratulate you?” wrote in the caption of his Instagram post, seemingly making a play on a line from the drama he and Shin-hye co-starred in.

Other guests included F.T. Island's Lee Hong-ki who sang "I'm Saying" (from the OST of The Heirs) as well as EXO’s DO who performed "Beautiful”. Kim Bum and Nam Goong-min were also present.

Min-ho, in words printed in Hangul or the official writing system of South Korea, shared snaps of “Park Shin-hye” and “Kim Tan.”

Apparently, these were the names written on the invitation sent by Shin-hye, according to Korean entertainment news site Soompi. The actress addressed Min-ho as his character in the drama.

Shin-hye and Tae-joon tied the knot on Saturday, January 22. Shin-hye’s agency, Salt Entertainment, confirmed this earlier in the day.

It was in November 2021 when Shin-hye and Tae-joon confirmed their engagement. That same month, they revealed they were expecting their first child.

Shin-hye has starred in numerous successful Korean dramas over the years including You're Beautiful, The Heirs, Doctors, and Memories of the Alhambra.

Tae-joon, on the other hand, has appeared in dramas such as Missing 9, Suspicious Partner, and Exit.