Celebrity couple Edu Manzano and Cherry Pie Picache took some time off their busy schedules to go on a beach vacation along with the actress's son, Nio Tria. 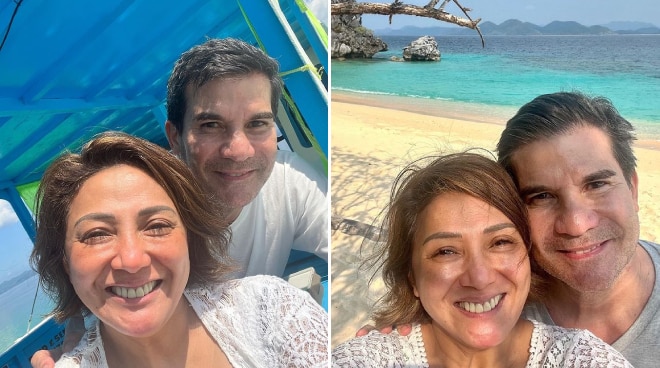 Celebrity couple Edu Manzano and Cherry Pie Picache took some time off their busy schedules to spend quality time together in Palawan.

On Instagram, Edu shared photos from their beach getaway, which also included the actress's son, Star Magic artist Nio Tria. Together, the three seem to be having the time of their lives as they soaked up the sun, sea, and sand of the island paradise.

"Heaven on earth!" the actor wrote in the caption of his post, along with the hashtags #Palawan and #PlaceToBe.

Earlier, the couple surprised their fans as they admitted that they briefly dated each other in the past.

“We were dating almost a year. Like mga two decades ago,” Cherry Pie said, before adding in jest, “Hindi niya ako makalimutan."

Despite going their separate ways, both Edu and Cherry Pie said that they never quite drifted apart and continued to see each other in events or gatherings.

"We would always be talking sincerely. We knew that we still like each other," said Edu.

"We remained friends and we would always see each other. And every time we see each other there is tension, which is a good thing, and something different," added Cherry Pie.

Edu and Cherry reconnected when they worked together on the ABS-CBN primetime series“Marry Me, Marry You.

Prior to dating Cherry Pie, Edu was in a relationship with his non-showbiz girlfriend Iryne Garcia. The actor was previously married to stars Vilma Santos and Maricel Soriano. He also has two children with former commercial model, Rina Samson.

Cherry Pie, meanwhile, is separated from her former partner, Gary Tria, who is the father of her son Nio.