A child of television hosts Iya Villania and Drew Arellano has also been infected with the novel coronavirus. 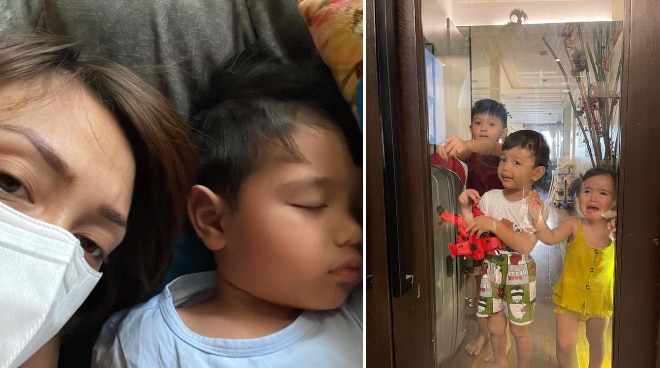 A child of television hosts Iya Villania and Drew Arellano has been infected with the novel coronavirus.

Iya shared the news in her most recent Instagram update, saying that their youngest son Leon has joined her in isolation after also testing positive for COVID-19.

"I knew chances were slim but after almost a week, our little kuya...has joined me on the dark side. Leon woke up with a fever and also [vomited] this morning," she said.

Iya and Drew have been isolated from their children after Iya, who is pregnant, tested positive for COVID-19.

Aside from Leon, a household helper who takes care of their one-year-old daughter Alana also contracted the virus, according to the TV host.

Fortunately, however, Drew has since tested negative via antigen testing and was no longer infectious, allowing him to leave isolation and look after their two kids on the "other side" while Iya takes care of Leon.

"Geez... This COVID is so tricky ah! It’s not as simple as positives with positives and negatives with negatives. The moment someone tests positive and is put in a room with other positives, the most recent positive’s Day 1 becomes everyone else’s Day 1 (did you get that?)," wrote Iya.

"So before having Leon join the dark side and bringing us all back to day 1, Drew and I had to decide for him to join the 'clean' side since he was already on day 7 (although I brought him back to day 4). Thank goodness he tested negative in 2 antigen tests showing that he was no longer infectious. So now he’ll continue his quarantine on the 'clean' side with a mask on to help take care of Alana whose mother and yaya are both now in isolation. Still hoping for the best for Alana, Primo and our 2 other ates who are keeping the home from falling apart while I’m isolated."

Stressing once again how tricky their situation is, Iya said: "It’s almost like it’s better if everyone just gets sick na lang so that you can all start and end together, but then you also don’t want to risk it and still hold onto that hope that others are spared 'coz you don’t know how bad it might actually hit them."

Despite their family's ordeal with COVID-19, however, there is one thing that Iya is thankful for: that she and Drew got the virus first.

"I still thank God that He allowed for Drew and I to get thru this first so that we could already be on the road to recovery to care for the little ones we love when it’s their turn," she said.

Another silver lining, she said, is that though there are still no COVID-19 vaccines available for kids, their children will now develop the antibodies.

It was only on Monday, January 10, when Iya first shared her family's battle with COVID-19 via a heartbreaking Instagram post.

She and Drew joined the growing list of celebrities who have recently announced getting infected with the virus, amid a fresh surge of COVID-19 cases in the country.