Weightlifting champion Hidilyn Diaz delighted her fans by dressing up as a popular character in the hit Disney animated film ‘Encanto.’ 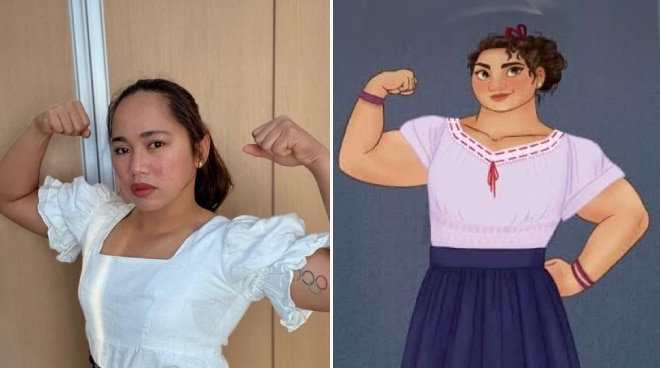 Weightlifting champion Hidilyn Diaz delighted her fans by dressing up as a popular character in the hit Disney animated film Encanto.

On Instagram Stories, the Olympic gold medalist shared photos of her channeling Luisa Madrigal, the sister of lead character Mirabel who had been gifted with superhuman strength, allowing her to effortlessly carry massive, heavy objects such as buildings and bridges. Back in July 2021, Hidilyn, 30, made history as the first Filipino to win a gold medal in the Olympics after she successfully lifted 127 kg in the clean and jerk event.

She bested eight other athletes in her category, including world record-holder Liao Qiuyun of China.

In a previous interview, Hidilyn said she is happy to bring pride to the country especially as it faces a crisis due to the COVID-19 pandemic.

She also shared what was going through her mind as she was lifting her final weight of 127 kilos.

Hidilyn's historic triumph in the Olympics has earned her a celebrity status. Back in October 2021, the weightlifter made headlines after she announced her engagement to her boyfriend and coach, Julius Naranjo.