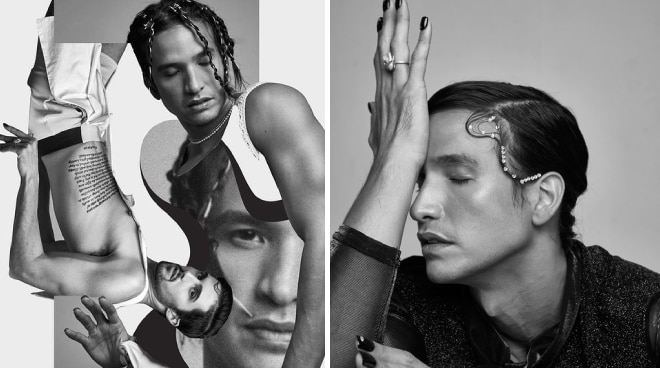 After going viral earlier this month when photos of him hitchhiking in briefs in Tagaytay circulated online, singer and actor Markki Stroem is making another splash with his recent online fashion pictorial featuring him in four gender-bending looks shot for a digital magazine. Posting the first of three cover images of Markki, Parcinq magazine shared why they chose the Fil-Norwegian performer as their cover model this month.

They wrote, “Markki is a master of many trades. His roles as an actor may change, but Markki Stroem, our September cover star, knows exactly who he is. Let's dive into the unknown with @markkistroem and listen to his narratives while he speaks about real issues like the importance of mental health in these challenging times. As the actor-model graces our #BeautyandStyleIssue, Markki wants to remind everyone that there's hope even in the face of tragedy.”

On his Instagram account, Markki shared how the shoot prepared him for his next project. He wrote, “From this shoot alone, I learned so much about queer culture and living one’s truth. This will help me so much as I enter my next acting challenge as a ‘Drag Queen’. There is so much toxic masculinity in the air that sometimes, the only way to fight back is  embrace the TRUTH that you are given, and read a Bish to filth. That’s what the block button is for. Remember, no one has ANY right to dictate who you are and what clothes you wear. YOU are YOUnique. Keep living your realness! You are AMAZING just the way you are

Through #LoveAtTheEndOfTheWorld we learn to understand different cultures within the LBGTQIA++ population. At the END there is NO HATE but only FORGIVENESS. ”

EXCLUSIVE: Markki Stroem on getting naked onscreen: ‘There is no need to be shameful’

After posting photos from the pictorial which showed him in various looks like Jamaican to celestial, the 34-year-old actor shared a status on his Facebook page revealing the mixed reactions he received from netizens after posting the photos.

He wrote, “Such a good day today! Met so many amazing people, and blocked a LARGE amount of people too with soo much hate in their heart. I think there is a part of themselves that they cannot accept in turn saying hurtful/homophobic things.

I don’t give second chances, if you say something racist, homophobic, transphobic or poke fun at mental illness… You will automatically be BLOCKED for my sanity and for the sanity of the people who follow me. This has been a warning. I do not tolerate BULLYING.

“With that said, I want to wish everyone a lovely Sunday evening. Let’s all choose to be kind, cuz I’ll be kinder. If you choose bullying, I WILL fight back.”

READ: Markki Stroem describes new BL series ‘Love At The End of the World’ as ‘a rollercoaster ride full of laughter and pain’

In a previous interview with PUSH, Markki shared why he has no problem showing skin or getting naked in front of a camera. He shared, “I have also been a professional theater actor for 11 years now, working with some of the finest actors of our generation. When a director tells them they need to take off their clothes for a scene, there is no malice, it is part of the story, and it needs to be told. Sex is part of life, there is no need to be shameful of our bodies. We were all born naked, and the rest is drag.” Markki is part of the cast of the BL series Love At the End of the World.