In her latest vlog, Heart Evangelista showed some of her favorite shoes, including some pairs she bought from fellow actress Rufa Mae Quinto. 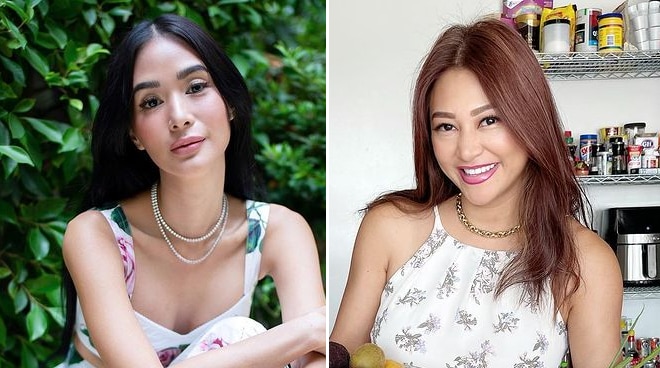 In her latest vlog, Heart showed some of her favorite shoes, including her vintage Louis Vuitton strappy sandals, which she's had since she was 18; her sequined Christian Louboutin pumps, which she considers her "lucky shoes"; and her custom Christian Louboutin Daffodile Strass platforms which she wore to her 2015 Balesin wedding to Sorsogon Governor Francis "Chiz" Escudero.

Aside from these, Heart also showed two pairs of secondhand heels that she bought from fellow actress Rufa Mae Quinto.

"My god, her collection. She had a little sale on her Instagram. I'm sorry guys if wala na kayong naabutan kasi binili ko na lahat ng magaganda. Sobrang ganda ng collection niya. As in all runway Chanel boots... But she was playing around with six five, six, and seven, and I could only fit size seven. So I also got shoes from her," she added.

One of those pairs was by the Italian luxury fashion house Gucci, which Heart said she bought from Rufa for only PHP5,000.

In her vlog, Heart said her love for shoes began back when she was still very young.

"I loved it so much that when I was about four or five, I remember wearing my mom's turquoise... I think it was Escada strappy shoes. I've always wanted to wear them and she wasn't home that time and I did. I tried them on, tried walking down the stairs and then I just fell. I rolled down and I hit my head on a beveled glass table, which explains why I have a slice right here (my eyes). It was seven stitches," she revealed.

According to the actress, she started investing in luxury shoes when she joined showbiz more than 20 years ago.

"As I started to work, that's when I started to invest in shoes. Because it was just part of my job. I realized how it lasts longer so from a few pairs, it became to this," she said," she said.

While she owns a lot of designer footwear, Heart, who has been dubbed a real-life "Crazy Rich Asian", said she doesn't mind wearing pieces from low-end brands as well.

"I don't mind... Of course I invest in certain pieces like clothes, coats, jackets, certain skirts, certain dresses. But ... I love high-end, low-end. I think that's more sustainable when it comes to your spending and everything," she said.