Miss World Philippines 2018 Katarina Rodriguez, who is pregnant with her first child, plans to deliver her baby via water birth. 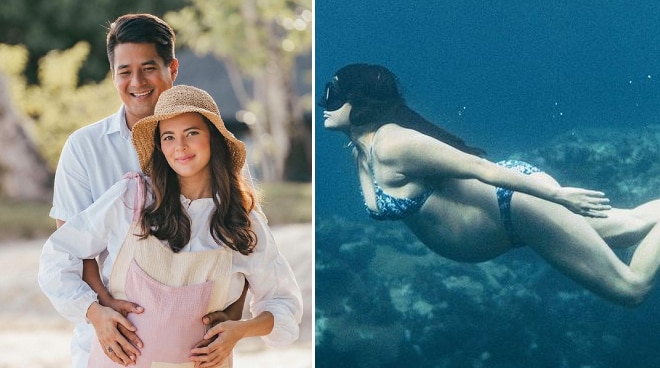 In an exclusive interview with Metro.Style, Katarina and her partner, businessman Niño Barbers, opened up about their preparations in welcoming their first child together.

“We’re doing water birth. That’s the stuff that we’re finalizing now. Flying the midwife from Manila here and it was so nice that Coleen (Garcia) is lending us her pool because she has a legitimate birthing pool," said Katarina, who is currently in Davao with her partner for their baby's arrival.

“Before that period where I knew I was pregnant and it wasn’t confirmed yet to him, for some reason, I just thought right away that I want to give birth in Davao and that I wanted a water birth," she added.

At the time, Katarina, who is based in Siargao, said she still hadn't done her research about water birth. But the concept of being in water while giving birth sounded appealing to her.

“I guess being in Siargao and being always in the water or near the water and the fact that the baby’s in liquid now and will come into the world and have such a smooth transition, it sounds so nice for the baby and for myself. The only way I can think of it is anything outside of the water, I’m just ‘Oh, baka it’s going to be tough to push out the baby.’ At least, I’ll have some sort of gravity working in my favor with the water, with the pool,” she added.

While she is excited to finally meet their baby, Katarina said she is enjoying every minute of her pregnancy.

"I’ve talked to other pregnant moms or moms who just gave birth, they always tell me, ‘Don’t you wish the baby will come out na at this point? It’s like a waiting game.’ And I’m like ‘No, I’m enjoying the baby being here just in my tummy and safe,’" she said.

It was in early August when Katarina and her partner announced that they are expecting their first child, via a YouTube vlog titled "We have an announcement."

Katarina, 28, rose to fame after placing third in the second season of the hit competition Asia's Next Top Model in 2014. In 2017, she was crowned Bb. Pilipinas Intercontinental, and later represented the Philippines in the Miss Intercontinental pageant, where she placed first runner-up. She also competed in the Miss World pageant in 2018.

She eventually ventured into acting, her breakout role being Rio Isla in the hit ABS-CBN series Make It With You, which starred Liza and her onscreen partner Enrique Gil.