‘He’s into Her’ actor Donny Pangilinan looks forward to working again with Belle Mariano on the second season of their series. 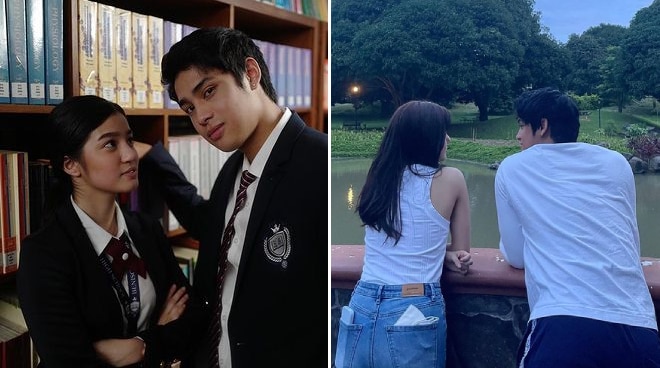 With the recent announcement that the Kapamilya hit series He’s Into Her is returning for a second season this year, fans of the show can look forward to seeing their favorite love teams onscreen once again with the cast led by Donny Pangilinan and Belle Mariano.

READ: ‘He’s Into Her’ confirmed to return for second season

When asked what was the biggest lesson he learned after shooting their first season, Donny said it was the lesson about bullying that struck with him the most.

“I just feel like the biggest thing to get out of this is just that everyone is going through something talaga, as in everyone. If you feel like there’s this popular dude who you think has it all, you don’t know kasi eh kung anong nangyayari sa bahay niya. Kung ano yung pinanggalingan niya and sometimes they take it out on other people which is wrong. But you have to understand sometimes that’s their venue. And it sucks. It shouldn’t be that way. Bullying should never be tolerated. Everyone has their own story and you have to learn from them and relate with them and try to understand,” he shared.

From playing the third wheel in James and Pat and Dave to the main leading man in He’s Into Her, Donny said he is thankful to ABS-CBN for the opportunity.

“It’s unexpected and excited lang ako and happy lang ako na nandito tayong lahat ngayon. Hindi ko rin naman in-expect na magiging ganito yung success. But more than anything, I think I’m just blessed and grateful. My favorite scene last season ang dami kasi. One of them would be the theater scene. When we were presenting about project block kasi dun nagbago lahat. That was the first time that I really saw the whole cast, wala pang COVID nun so parang na-feel ko grabe nasa show tayo, we’re doing this. Ang cool lang kasi. I think that was one of them,” he recalled.

After a season on playing a couple onscreen with Belle, Donny shared just how much easier it was to create the onscreen “kilig” their fans look for as the days progressed.

“Madali na kasi naging kumportable na kami sa mga scenes. Kumpara sa first few episodes parang nandun na kami sa point na if we need to do it then let’s do it. It’s not like we have to think so hard. But we still do. We read the script together and talk about how to do it but honestly Belle and I were like, ‘We have to come to a point where there’s still the spontaneity when we get to the scene. Yung hindi natin na-rehearse.’ Yun lang yung gagawin namin.”

The 23-year-old actor shared why their love team DonBelle works so well on and offscreen.

“It just happens. We don’t need to try. I guess that’s the biggest thing kasi our personalities kasi I think it works. We’re just comfortable with each other and it’s fun. You know it works when it’s fun what you’re doing. It’s not just work like I’ll go there, pack up, and leave. I think when there’s that factor that I get to work especially with these people. Especially with Belle. That really motivates you to work well, work hard, and not just think of it as a job. There’s so much you can learn,” he added.