Maroon 5’s Adam Levine and his wife Behati Prinsloo gave a glimpse of their home in LA. 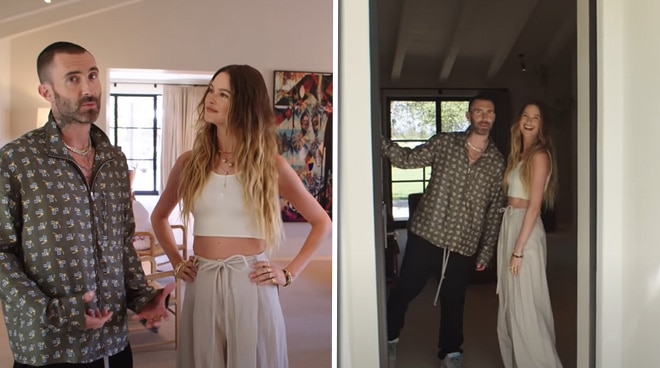 Maroon 5 frontman Adam Levine gave a tour of his home in Los Angeles, California together with his wife, Behati Prinsloo.

The superstar couple opened their doors and welcomed Architectural Digest to their Pacific Palisades ranch house.

Sharing the colorful story behind the house, Adam said what he loves the most about his one-story home is that it’s “super cozy.”

“This is a one-story ranch house that was at one point a cliff may house. I’m a huge architecture fan. We love the fact that it’s one story, super cozy, and I think it’s super beautiful,” Adam said.

Behati, for her part, said she’s happy to have a house where her kids can run around and play.

“It’s fun because the kids can kind of run on the lawn and we sit in here, listen to music when it’s cold in LA,” Behati said.

While the house has a modern design, Adam said it still has that “home-y” feel to it.

“I think the coolest thing about this house is the fact that it’s a very, very modern house, but for as modern as it is, it’s so cozy, and it feels like you can really live in it. So, I think we really succeeded in that and we’re really proud of it,” Adam said.

The “Payphone” hitmaker said he’s lucky to have found a place with a big yard and one which he and his wife imagined as a place where they see their kids growing up.

“It’s so rare to find a property with a big yard in LA. And so when we saw that yard like we had just a tunnel vision for it. And we thought to imagine our kids growing up here and being able to run around,” Adam said.

Among the places Adam and Behati showed to their fans were their home theater, their dining room, their bedroom, their bathroom, their home bar which Behati considers as one of her favorite spots. The couple also showed each of their walk-in closets.

The house also has a pool, a guest house, and a beehive, among others.

Adam Levine and Behati Prinsloo began dating in 2012 and got married in 2014. They have two daughters named Dusty Rose and Gio Grace.

He is best known as the lead vocalist of the American pop rock band Maroon 5. He made a crossover into acting and eventually as a judge for the reality singing competition The Voice.

Behati Prinsloo, on the other hand, is best known as a supermodel for American beauty and clothing company Victoria’s Secret.