Singer and songwriter couple KZ Tandingan and TJ Monterde talk about writing in their native tongue together for the first time. 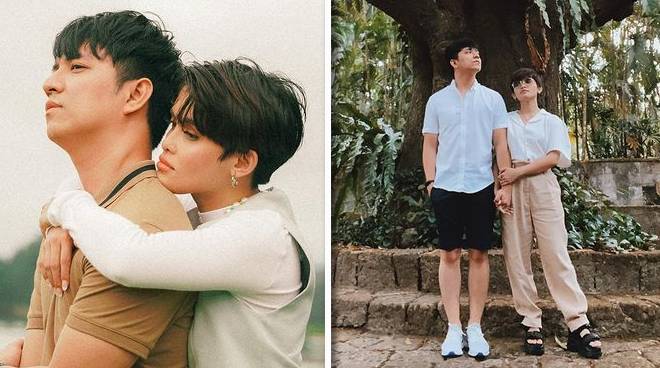 Unlike her husband TJ Monterde who has already released Bisaya songs in the past, KZ Tandingan just released her first Bisaya single titled “Dodong” this year.

“I wrote that song seven months before we proposed to each other. So mga 2019 pa. First time kong magsulat ng Bisaya lullaby. It’s my first time writing a lullaby in general so it’s very personal to me. I never meant for it to be released as a single kasi parang sinulat ko lang talaga yan for TJ para pag hindi siya makatulog may papakinggan siya, ganyan. Tapos fast forward to after releasing ‘Can’t Wait to Say I Do’ and ‘Simula’ from the Simula playlist,” she shared.

TJ said he was inspired by his wife while writing his current single in his native dialect.

KZ admitted that writing in Bisaya at this point in their lives was very important to them for many different reasons.

Actually sobrang  perfect kasi na kinasal kaming dalawa, both Bisaya and we are celebrating this milestone in our lives na gusto namin i-share sa mga tao and siyempre pinakamalapit yung mga puso namin sa mga Bisaya. So we want to tell our story sa kanila in our own native tongue kasi yun yung mas malapit sa puso nila. And I think it is our responsibility to honor our language kasi part yun ng identity namin and by doing this we want to encourage other artists also to kumbaga  if they also speak in a different language sa probinsya nila or saan mang parte ng Pilipinas, to encourage them to write in their language kasi iba din yung beauty ng Bisaya. The main reason is nagsulat kami for each other because we want to tell our story to the people who matter the most to us,” she explained.

The couple, who both grew up in their respective provinces in Mindanao said that they also like listening to songs in other dialects.

Listen to KZ’s “Dodong” and “TJ’s “Inday,” out now on music streaming platforms, and make sure to check out the “Simula” playlist on YouTube.