First-time mom Rachelle Ann Go shares a glimpse of how much she enjoys raising her son Lukas Judah in London. 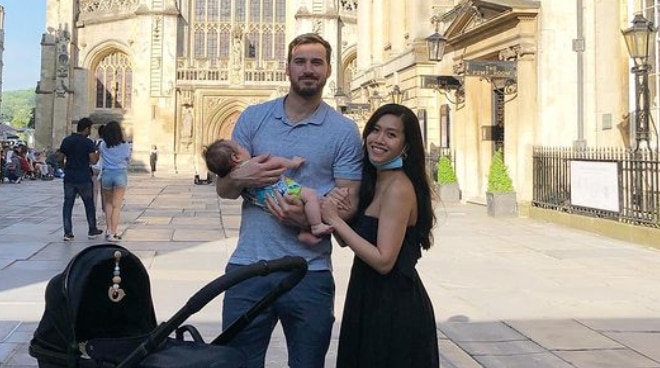 After giving birth to her first child Lukas Judah last March, singer and actress Rachelle Ann Go has been enjoying becoming a first-time parent with husband Martin Spies in their home in London this year. The 34-year-old theater star shared an update on social media after her son turned four months old.

“Such a happy baby! He is showing us his character more and more everyday!” she put in the caption.

READ: Rachelle Ann Go opens up about her struggles as a new mother during first 3 days

On her Instagram account last August 4, Rachelle shared a photo of herself and her baby watching a rainbow from their home as well as photos from a family visit from Martin’s parents.

She wrote, “We wanted a mini celebration with Lukas’ grandparents visiting from the States! As we were preparing for the boodle fight, it started pouring! I told everyone how rain makes me feel down (parang sa movie lang nakaka-senti

), and that I wish to see a rainbow. Just like that, the most vivid rainbow I’ve ever seen in my life had appeared. I got so excited for Lukas to see it—God’s promise, perfection, power and purpose.

What does a rainbow mean to you?

I cannot wait for him to see more of it and experience God’s creation!

Rachelle and Martin named their first child “Lukas” which stands for “bringer of light,” and “Judah” which means “let Him be praised.”

The couple currently resides in the United Kingdom. Rachelle married Martin in a private beach wedding in Boracay in 2018 and they celebrated their third wedding anniversary last April.

READ: Rachelle Ann Go reveals she was scared to become a mother

Rachelle starred in various musical theater productions on Broadway and West End like Miss Saigon, Les Miserables, and Hamilton where she played the role of Elizabeth Schuyler Hamilton, the wife of American founding father Alexander Hamilton.