Actress Sam Pinto was treated to a surprise baby shower by her loved ones. 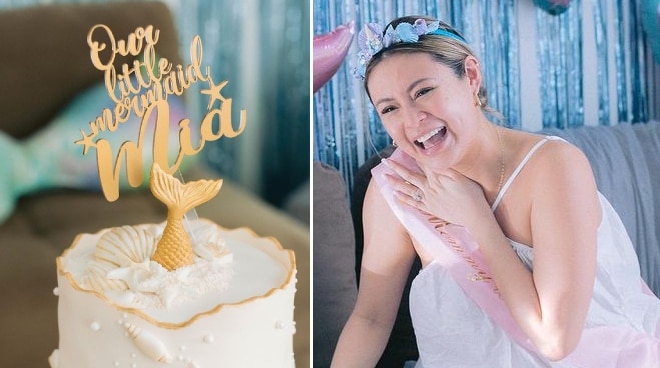 Actress Sam Pinto was treated to a surprise baby shower by her loved ones, just a few weeks before she gives birth to her first child with her husband, professional basketball player Anthony Semerad.

Photos of her mermaid-themed baby shower were shared by her sister-in-law, actress Gwen Zamora, on Instagram.

"You’re almost there babe! One advice I can give is to embrace and enjoy every moment because next thing you know she’ll be running all over the place and throwing tantrums!" Gwen, who has a son named Cooper with Anthony's twin brother David, said in her post on Wednesday, August 4.

"Jokes aside, I’m super happy for you and Anthony, that I tear up just writing this. Rest assured Cooper will always have her back and love her unconditionally. Love you both! Este THREE!" she added.

Sam, who made her showbiz breakthrough in 2009 via Pinoy Big Brother, is expected to give birth next month.

It was in early May when she and Anthony announced that they are expecting their first child.

Their announcement came just months after the couple tied the knot in a civil ceremony held at Conrad Manila in Pasay.

In a vlog they released soon after, Sam and Anthony revealed that they are expecting a baby girl, and that they've decided to name her Mia Aya Semerad.

"Because we really love the ocean," the couple said, as they explained the name of their daughter.

"Mia is queen of the ocean, so it's the perfect name. And Aya, it's a very lucky name. Syempre we want her to be lucky," they added.