EXCLUSIVE: Director Shandii Bacolod talks about new BL series ‘Love At the End of the World’

‘Love At the End of the World’ director and writer Shandii Bacolod talks about shooting the new digital series during a pandemic. 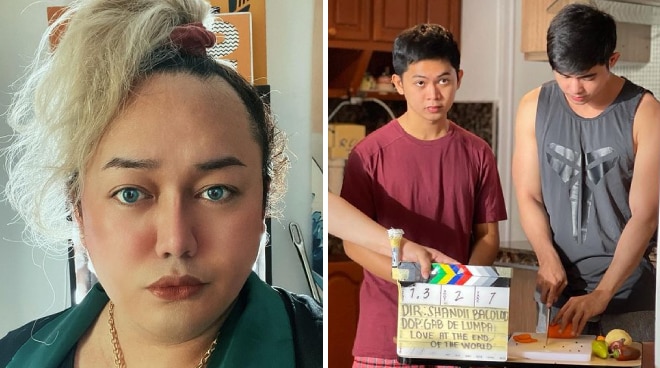 Making his directorial comeback this year with Love At the End of the World, writer and director Shandii Bacolod shared with PUSH when he first created the idea for the newest BL digital series.

“Three years ago, I was working on a concept about a couple’s love story in their last 7 days of existence. So originally, film siya with the same title. In 2020, in the middle of the pandemic, I resumed writing and decided to do it as a series. Then pitched it to two of my good friends—celebrity makeup artist and entrepreneur Yves Marcelo and actor Yam Mercado. Then it was shelved. Then May 2021, we resumed with the project with three more filmmakers on board—actors Nico Locco, and Rex Lantano±—and cinematographer Gab Delumpa. So the six of us became the executive producers of this project,” he shared in an exclusive interview with PUSH.

Produced by MSB Entertainment Production and the newly formed Temporary Insanity Pictures, Shandii said he was ready to go back behind the camera after producing films like the 2019 Metro Manila Film Fetival entry Culion.

“Temporary Insanity Pictures was officially established on May of 2021. This is the product of 6 Filmmakers who wanted to create out of the box projects. Love At the End of the World is my directorial comeback. My first feature film is called Fidel in 2009. Then I co-directed a CinemaOne film called Maximus & Minimus followed by Ben & Sam in 2010 and Sponsor in 2011. Then I stopped directing and focused on producing. In a general perspective, same lang naman BL with the other series projects. I think what makes our series more challenging is the current pandemic situation and all the nudity and sex scenes (laughs),” he admitted.

A recent addition to the cast was singer and actor Markki Stroem who just finished their taping bubble in Tagaytay City.

“Marrki plays Mark Anthony Handang. A hot lad from the province who symbolizes all the goodness in our society. His character will tackle forgiveness, resilience, and the power of love. I want a character kasi na speaks na even in our darkest moments, there is hope. Marrki is so damn good. Napakahusay! He prepared for his role: lost weight, studied dialects, we did some readings and workshop and we both worked hard on his character. Merong isang particular scene si Markki na umiyak ako and break down. It was just too real and painful,” he recalled.

Unlike other BL series in the country today, Direk Shandii said his brainchild is “an ode to loneliness. Even in loneliness, there is hope. And even in our darkest moments, there is love to find. I don’t know if I can say that our series is not mainly or super BL. I want to say Love At the End of the World is a love story. Love story. Period. Non-BL fans will watch it because it’s something new and a bit f**ked up (laughs),” he added.

With the country still under lockdown, the director shared the challenge for filmmakers like him in the age of lock-in tapings in the new normal.

“I miss the theaters. Super. Mainly because I produce films for the theaters. So it was really sad when all the cinemas closed. Yung transition ko as filmmaker to produce now for online platforms, it wasn’t really hard because I also have been producing TV commercials and digital ads. And I am very hopeful and excited to once again sit inside a cinema and watch a movie. Babalik din tayo. Dahan dahan. i am sure of that!” he added.

Love at the End of the World Shandii Bacolod Markki Stroem