JM De Guzman recalls his drug relapse in 2016: ‘I was imprisoned by pain and hate’

‘Init Sa Magdamag’ actor JM De Guzman looks back on how he finally recovered from substance abuse many years ago. 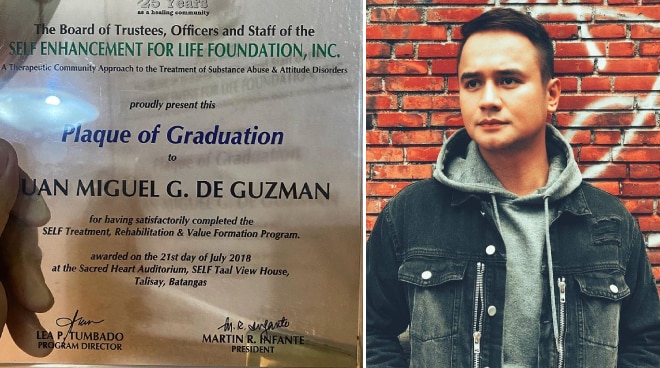 Three years since he completed his last rehabilitation program for substance abuse in Batangas, actor JM De Guzman shared an emotional post on his Instagram account last August 25 recalling how his family intervened to get him back into the program after his relapse in 2016.

JM wrote, “I remember 6 years ago, was sleeping in a hotel room. 5 or 6 huge guys woke me up. They had access [to] my room, pinned my head, elbows, knees, and chest while I watch[ed] the other guy inject something [into] my right shoulder. I felt weak in an instant. They carried me, took me out of the hotel in a stretcher. Outside the hotel since my head is tied, I see in my peripheral my aunt, mom crying like someone died. I cried too and shouted don’t let them take me. Fell asleep for 3 days inside the aero med van. Woke up alone in a small room with steel bars. Stayed there for a month. Then transferred me to rehab and stayed there for 2 years. This is because I relapsed after a 1 month basement and 1 year stretch in my first rehab.”

The 32-year-old actor, who is currently starring in the primetime soap Init Sa Magdamag along with Gerald Anderson and Yam Concepcion, also admitted in the same post how he is moving forward with his life after going through that unforgettable experience. “This haunts me everyday. in my sleep or while wide awake. For years I suffered. I was imprisoned by pain and hate. Patched it up with a drug that made me lose everything I love.

Thank you God for everything.

I pray for happier and peaceful days to come.

maybe I’m sharing this to remind other people to stop f**** with my peace or anyone’s peace…
I don’t want to be that person anymore.

In his interview with Korina Sanchez on the show Rated K after finishing rehab, JM talked about starting his journey with drugs which started when he was 18 years old.

“Akala ko makakatulong siya sa akin as a person, as an actor at first, but nung nag-rehab ako nahukay sa akin na I have issues since I was a kid na like I was bullied when I was really young. So wala na akong self-esteem or confidence at that time. Taking drugs gives me power,” he admitted.

READ: This is how JM de Guzman copes with panic disorder