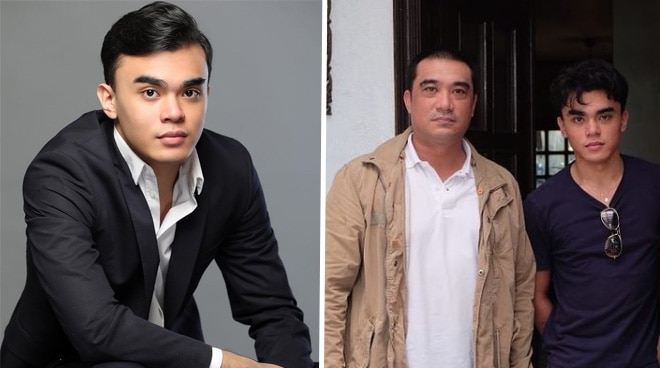 Vitto Neri first started his career in showbiz in 2018 acting opposite his father Victor Neri in the Cinema One Originals entry A Short History of Bad Things. This year he was officially welcomed into the Star Magic family during the Black Pen Day event.

“I still can’t believe it sometimes. I’m still very grateful for the opportunity. I chose Star Magic because of the reputation it has in developing good artists. That’s one of the deciding factors sa akin,” he said.

READ: Vitto Neri and Luis Vera Perez on why showbiz blood is no big deal, wish to carve their own path

Vitto admitted he didn’t grow up immediately wanting to become an actor. “Siguro grade 10 ako kasi I started getting into watching movies and thinking I wanted to be a director. But I tried to act kasi my dad’s an actor so I said why not. Then I took a workshop then yun na parang tuloy tuloy na until yung Star Magic public workshop that’s when it started, the summer of 2018. Dream role ko is drama and action. To try what my dad used to do,” he said.

Even with his dad being part of the first batch of Star Circle talents launched with 1995 along with Rico Yan, G Toengi, and Regine Tolentino, Vitto said he was never pressured to follow in his footsteps in showbiz, even admitting he had to convince his dad to let him try.

“Hindi naman. He told me when I started to just be you and whatever you can achieve, sa ‘yo na yun. Parang don’t try to beat me. I can’t eh kasi he’s the one and only and I’m the one and only Vitto Neri. I can only rival his name siguro in terms of galing. Siyempre we’re all unique. I’ll get to something, parang yung peak ko, pero sa dad ko, sa kanya na yun. He never pressured me to do anything. I had to convince him I wasn’t bored kasi he told me, ‘Are you bored? Wala ka bang magawa sa bahay?’ Ganun (laughs). Sabi ko sa kanya hindi, I want to do this. Tapos ayun, I was able to work with him sa first film ko. Dun niya nakita na I wasn’t bored. I was serious,” he shared.

Currently looking forward to doing more challenging projects in the future, Vitto revealed which local actors he would love to learn with.

“Actually I don’t have anyone in mind kasi for me everyone in Star Magic is good eh and I can learn from them. Siguro yung mga veterans like John Arcilla, si Paulo Avelino, mga ganun kasi I look up to them sa craft nila. You can see that they get into their character talaga especially si John Arcilla parang how he played Heneral Luna parang very inspiring sa akin as an actor. He put in the work talaga and everything just falls into place,” he added.