Raymond Gutierrez comes out as a member of LGBTQ community

Raymond Gutierrez comes out as a proud member of the LGBTQIA+ community in an interview for an entertainment magazine. 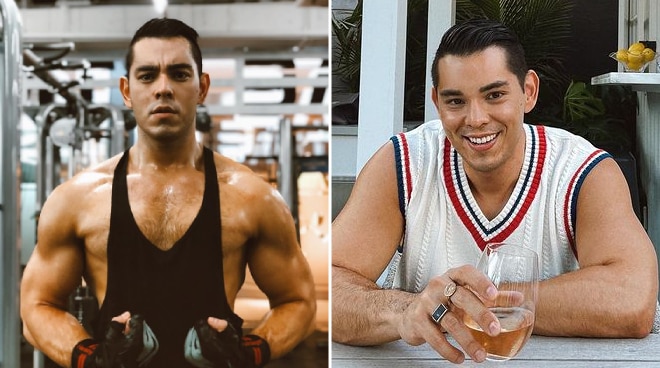 Host and fitness enthusiast Raymond Gutierrez said he's never felt happier and more content with his life, as he came out as a "proud" member of the LGBTQIA+ community in an interview for an entertainment magazine.

Speaking with Mega Entertainment's G3 San Diego, Raymond, the twin brother of actor Richard Gutierrez said, “I’m here to formally say that I am a proud member of the LGBTQ community. And it feels great saying that publicly because I am."

"I’m doing this now just because I’ve had so many learnings during the pandemic that maybe not a lot of—maybe a lot of people are going through similar situations as me," he continued. "I wanna empower those people. I wanna tell them that, ‘You’re not alone. I was going through the same things.’"

Raymond then opened up about the struggles he faced as a young gay man growing up, especially after he decided to join show business at the age of 19 to become a television host.

“Growing up, it was hard for me to even acknowledge even who I am. Like, what is this? I had my brother who was so similar to me but so different in so many ways. But he never had to explain his sexuality, so why should I? And that was my thinking growing up. But then entering show business at 19—well, I was a kid—but going back again to show business at 19 to be a TV host, that’s when it really hit me that, ‘Wow, being gay is really not accepted in a lot of these communities,'" he shared.

"Back then, being the new person on TV, I was bullied by a lot of the older people in the studios," he said. "Being gay now is not the same as being gay back then. 10 years ago, it was totally different. You feel like a mutant? You walk in to backstage and people will say, ‘Ah, ‘di ba ‘yun ‘yung baklang kapatid ni Richard?’ Like, I can literally hear them. And because of those moments where people really wanted to put me in a corner and really label me and kind of diminish my skills and diminish what I can bring to the table because of my sexual preference (that I didn’t even realize—I didn’t even know at that time?) I was still going through so many emotions at that time that I had no idea. Like, ‘Can I go through this first before you label me anything?’”

Raymond admitted that being the twin brother of a superstar and being part of a prominent showbiz family added to the already heavy burden he was carrying.

"So, that kind of became—why I got depressed and why I gained so much weight. I really became self-destructive. I turned to alcohol, I turned to drinking, partying, and to food unhealthy habits—just because I had no way else to express myself. And nu’ng time na ‘yun, siyempre, being part of a family that is in the public space—we’re all entertainers for many generations already—I wasn’t deciding on things just on my own. Things that I do will not only affect me, but will also affect my family. So, that was kind of like the burden that I was carrying. Like, I can’t be gay because my brother is a superhero, right? So, that was… Well, it’s tough for me,” he said.

He went on: “I don’t think I told anybody. And that was—and that’s the hard part? Like, I was stuck with myself for so long hating myself. I didn’t like myself for a long time. And that’s why I kind of became an overachiever and when I was new to the network that I was working in when older hosts would be, like, kind of label me as ’yung baklang kapatid ni Richard’ or…with all of these things in my head, I said, ‘You know what, I’ll take that as a challenge and I’ll be a better TV host than you.’ And you know what happened? I ended up hosting and replacing them on their Sunday show. So, [chuckles] it felt a great sense of kind of like, ‘Don’t put me in a corner, don’t push me aside because guess what? I can do a better job than you.’ And it kind of empowered me, actually. The more that people belittled me and the more that people put me in a corner kind of made me stronger. And I was like, ‘You know what, I’m gonna be the best TV host there is,’ and I tried and I won at the end.”

Raymond said having a great support system—family and friends—has given him the confidence to accept who he is and to love himself fully.

“As I grew older and as I matured, I realized the best thing that you can really offer your family is to be yourself. So drop the cloak, drop the act; just be yourself. And again, I’m lucky just because my family wants nothing but the best for me. They always just want me to be happy. We’ve always been very close and at the same time, I had friends that are like family to me. My chosen family who made it much easier to kind of realize that it’s never too late to love yourself, it’s never too late to acknowledge those feelings, and face your fears,” he said.

Towards the end of the interview, Raymond stressed that sexuality is just one aspect of who you are and that it shouldn't define you as a person.

"It shouldn’t be—it shouldn’t hold you back in any way. I feel like me, personally, having a masculine and feminine side made me more creative; I was able to push boundaries not only in entertainment but in night life and publishing, in events, and I was able to kind of bring all of the things that I enjoy and all the things that inspire me in one space and make magic. I think that’s the whole thing about this whole story; is that I feel like you will be loved and no matter who you are, no matter who you love, it’s valid, you’re valid, and the people that really care about you and love you will support you no matter what," he said.