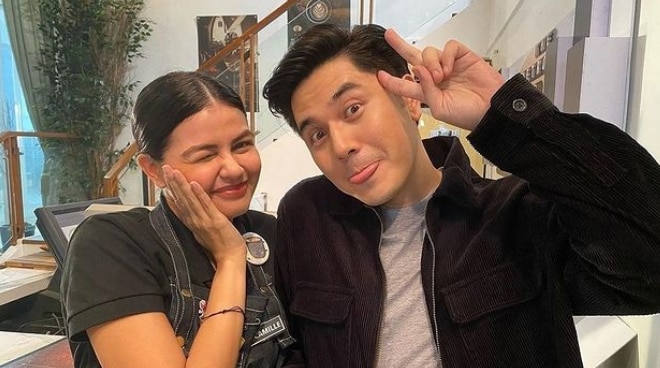 After working on the drama series Walang Hanggang Paalam, Paulo Avelino shared the biggest challenge about working on his latest ABS-CBN project Marry me Marry You during their lock-in taping cycles.

“This is actually my second show na naka-bubble. It takes time to adjust because that one right after pandemic nag-Subic na kami, naka-lock in na kami dun. It’s hard even though lessened yung work hours but yung 12 hours na yun ratsada yun na nonstop working. May breaks naman. The hardest part actually is not like being on the bubble and working almost everyday. The hardest part is sometimes you get homesick. Kaya ang saya rin nung last (series) namin. I’m very grateful to our cast during Walang Hanggang Paalam and now kasi parang when they see na you are sad now sila yung umaalalay sa ‘yo and they try to make you happy and they find [ways and] means to take your sadness away,” he admitted to writer G3 San Diego during his first Instagram live interview last August 16.

With his fans used to his mostly serious and dramatic roles onscreen, Paulo revealed why he looked forward to doing a romantic comedy series this year.

“It’s different because as an actor sometimes the shows you do affects you in a way especially if you’re doing it for so long. Parang if you do a show na baliw ka for a year, parang at some state in your life nadadala mo talaga. Nagiging baliw ka na rin in a way (laughs). It’s nice to do a rom-com for a change of pace. A lot of new co-workers here that I haven’t worked with before. And parang good vibes naman tayo. Kumbaga ang hirap na ng past two years eh so pagaanin na muna natin para sa mga mannunuod,” he said on Live with G3.

READ: Paulo Avelino is hopeful about the future of esports gaming in the Philippines

Working with new leading lady Janine Gutierrez who transferred to ABS-CBN earlier this year, Paulo shared his experience working with her on the show. “She’s really fun to work with. Walang ka-proble-problema. She’s always happy all the time for some reason so nakakadala rin yung happiness niya. She’s very smart and easy to work with,” he said.

With Metro Manila still under Enhanced Community Quarantine (ECQ), Paulo said that they still have to finish taping scenes for the series which is scheduled for release starting next month. “After the ECQ we’re going to go back sa bubble to finish more scenes,” he added.