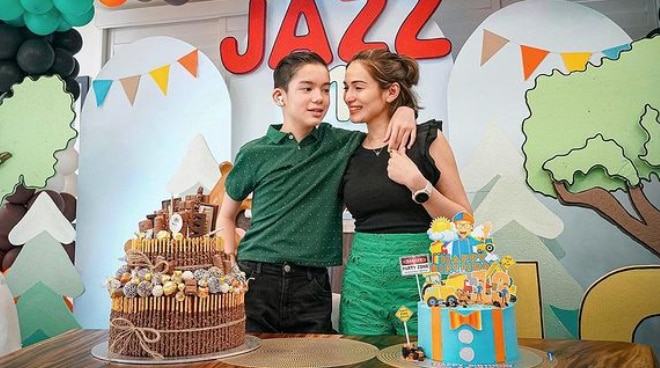 Alex Jazz, the son of actress Jennylyn Mercado, is now officially a teenager.

"Pero he will remain my baby boy forever!" wrote Jennylyn, as she marked her son's 13th birthday with photos of his intimate party on Instagram on Monday, August 16.

As seen in the photos, Dennis Trillo, her boyfriend, was present during the celebration, as well as his son Calix, with former actress and beauty queen Carlene Aguilar.

In her caption, Jennylyn added: "Happy 13th, my Jazzy! I love you so much!"

Alex is Jennylyn’s son with her former boyfriend, actor Patrick Garcia.
In the comments section of her post, Patrick’s wife, blogger Nikka Garcia, was among those who wished Alex a happy birthday.

Patrick and Nikka have been happily married for six years now. They have three daughters, namely, Chelsea, Patrice, and Francisca Pia, and one son, Enrique Pablo, whom they welcomed just last July.

Meanwhile, Dennis and Jennylyn decided to give their relationship another try after parting ways in 2011.
The couple celebrated their seventh anniversary together last January.