WATCH: Kathryn Bernardo gives a tour of her studio

According to Kapamilya actress Kathryn Bernardo, she has decided to put her studio up for rent until this year, so other artists can also experience it. 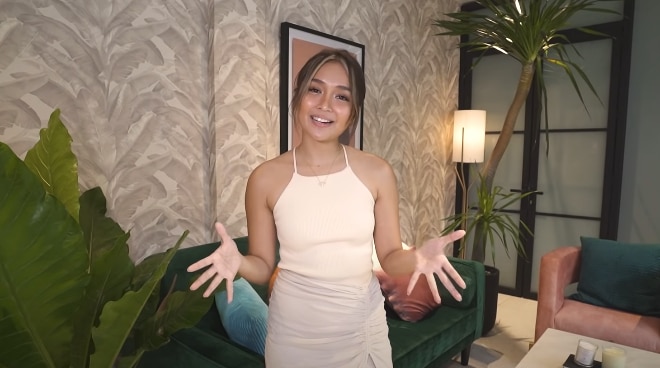 It was for her 25th birthday that Kathryn Bernardo’s mother surprised her with her very own studio. The actress’s birthday is on March 26 so she was not expecting to receive the “gift” months later in June.

Kathryn finally gave her fans a tour of her studio in her newest vlog which was uploaded on her YouTube channel, "Everyday Kath", over the weekend.

In the almost 19-minute video, Kathryn showed the main parts of her new property, including its gazebo, conference room, and main studio.

She also gave a glimpse of her makeup and wardrobe area, which has its own vanity set, resting couch, clothing rack, changing room, and personal toilet and bath.

"'Yun lang. It's very simple, but we really made sure na very useful 'yung mga ilalagay ditong gamit and so far sa mga past shoots namin, it's been really very convenient for me and for the team," said Kathryn. "This is like my second home simula nung ginift sa 'kin ni Mama 'tong studio na 'to, so I'm really, really happy."

She added: "Itong studio na 'to, it's not just a studio for me. Parang ito na 'yung nagiging tambayan place namin, and kunyari merong mga small family gatherings na very intimate, nagse-set up din kami rito so naging very useful siya sa amin. So thank you talaga to my Mama for this idea."

According to the actress, she has decided to put her studio up for rent until this year, so other artists can also experience it.

"Kung kailangan [niyo] ng studio, it's open. Let me know if you want to use it!" she said.

Watch her studio tour below:

Previously, Kathryn's mother, Min Bernardo, said she wanted to build a studio for her daughter so she could have her own place for commercials, pictorials, and tapings for her new segment, “TGIS”, on her YouTube channel.

She also revealed having collaborated on the project with Kathryn's boyfriend, actor Daniel Padilla, as well as the actress's makeup artist and close friend John Valle.

READ: Kathryn Bernardo surprised by mom with own studio