TV host and model Phoemela Baranda has marked another milestone in her life as a mother with the recent baptism of her youngest daughter, Illya. 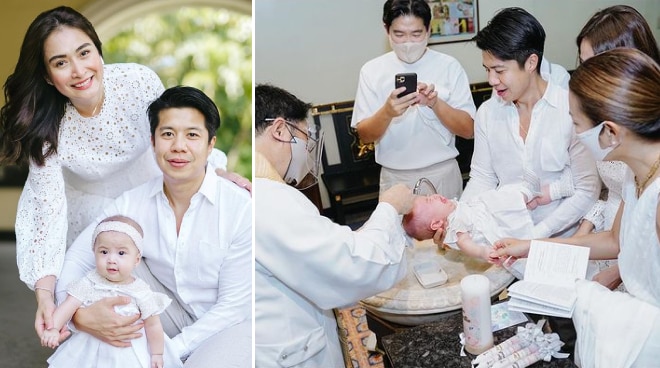 TV host and model Phoemela Baranda has marked another milestone in her life as a mother with the recent baptism of her youngest daughter, Illya.

On Instagram, Phoemela shared photos of the intimate ceremony held at the Santuario de San Antonio Parish in Makati amid the enhanced community quarantine.

As seen in the photos, she and her partner, businessman and professional race car driver Jason Choachuy, celebrated their daughter's christening with TV personality Tim Yap and model-turned-PR maven Apples Aberin, as Illya's godparents.

At the age of 40, Phoemela gave birth to Illya, her second child, last March.

She first announced her pregnancy by appearing on the cover of Preview's November 2020 issue. In her interview with the fashion magazine, the model revealed that she had planned having a child with her partner, who is a first-time father.

"I've always wanted another child, and my partner [wanted one] as well—it’s his first," she said.

Phoemela is already a mom to Kim Nichole, whom she had when she was just 19.

At that time, Kim—who was a teen housemate in Pinoy Big Brother: All In and is now 22 years old—described her mother's pregnancy as a "big blessing" for their family.

"I know a lot of things are going to change, but I'm happy for my mom because this is such a big blessing for us to have an addition to our family since it's always just been the two of us," she said.