Markus Paterson recalls ‘doubts’, ‘questions’ as he shares thoughts on being a first-time dad

Markus Paterson chronicled his experience as a first-time dad in his ‘Papa’s Journey’ series. 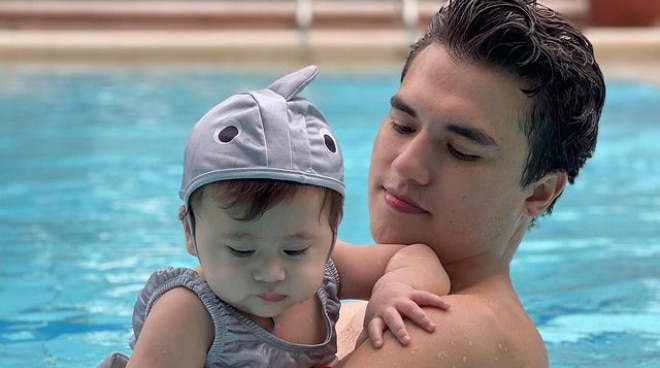 Markus Paterson gave his fans a look at a day in his life with his son Jude Trevor through his series on YouTube called “Papa’s Journey.”

Markus revealed he and Janella Salvador are currently looking for someone who could take care of their child as they will be back to work soon.

“We don’t have a yaya yet. And we haven’t really needed one. But now that Janella’s starting taping and I have ongoing lock-ins, so, siguro, until the end of the year,” he said.

“Wala eh. Kailangan talaga sa line of work namin eh. Kasi, if a good project comes along, you know? ‘Yeah, dad. You’ve got to earn money for me.’ I know, I know,” he added.

In the second episode of his “Papa’s Journey” series, Markus answered a number of questions from fans about fatherhood.

Asked about the changes when Jude came into his life, he said: “Marami. ‘Yung buong buhay ko nagbago. From my decision-making, my priorities in life, how I think, how I approach even the smallest situations.”

“It’s crazy. It’s really crazy. I’m sure most parents will agree with me that as soon as I saw Jude came out in the delivery room, parang siyang switch in my mind na flip outside down,” he added.

“Honestly, I wasn’t the most responsible guy on the planet. Bata pa ako eh. I was into going out with my friends. Grabe talaga ang pagbago ng buhay ko,” he continued.

He also admitted that he found it hard to be a father at one point, especially with doubts and questions popping into his head.

“Mahirap talaga. Marami talagang papasok sa isip mo na ‘Kaya ko ba ‘to? Kakayanin ko ba ‘to? Will I get enough work to financially support a child? There’s a lot of questions and doubts that will pop into your head,” he said.

Markus then shared that Janella and his family played a huge role to get him out of those questions and doubts.

“Pero, the main thing that brought me out of those doubts and those questions is, first of all, Janella and my family back home in the UK,” he said.

Then again, Markus said he has no regrets about being a father at an early age.

“But yeah, I’m not going to sugarcoat it. It’s definitely not easy being this young and getting thrown into the world of parenthood. But also, it’s not something that I would ever regret looking back on it. It’s not worthy of the thought of regretting it,” he remarked.