Kris Aquino took to social media to express her support for Maria Corazon ‘Corinne’ Abalos, who is representing Mandaluyong City in this year’s Miss Universe Philippines. 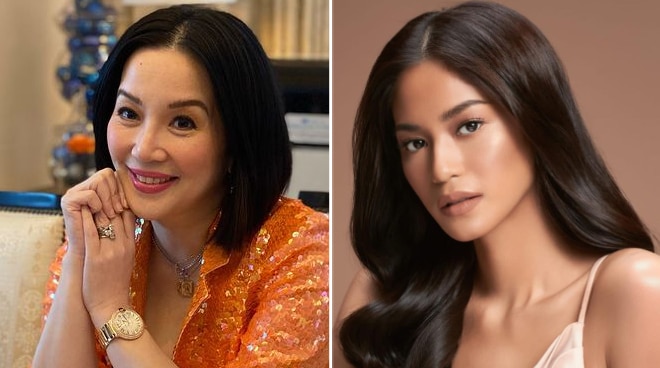 In an Instagram update, Kris urged her 4.8 million followers to download the Miss Universe app and vote for the beauty queen.

Explaining why she is rooting for Corinne, Kris said: "I don’t do this for just anybody -- but when her full name is Maria Corazon (exactly like my mom’s) and our relationship with her family goes all the way back pre-Edsa Revolution, plus her grandparents share the same initials as my dad (BSA) and my mom (CCA), then obviously alam niyo na. CORINNE ABALOS has my full support for Ms. Universe Philippines."

Corrine, 23, is the daughter of Mandaluyong City Mayor Menchie Abalos, who joined Binibining Pilipinas in the past representing Cavite. Her father is Benhur Abalos, who also served as mayor of Mandaluyong and is now the Chairman of the Metropolitan Manila Development Authority (MMDA).

In her post, Kris also explained why she thinks Corinne is a worthy delegate.

"I have never been afraid to make my choices known and since we do live in a democracy, pwede kayong mag-disagree with me. But Corinne is a worthy candidate, educated in Poveda and she graduated from DLSU (De La Salle University) in 2019 with a degree in AB International Studies Major in European Studies. Definitely, hindi tayo mapapahiya sa Q&A," she wrote.

Finally, the actress said: "To all my friends & followers, I hope you give her a chance."

In her response, Corinne said she could not believe that Kris, who is dubbed the country's "Queen of All Media", posted about her on her Facebook and Instagram accounts.

She also expressed her gratitude to the TV host for the support.

"Thank you so much, Tita," she said, before tagging Kris and adding two heart emojis. 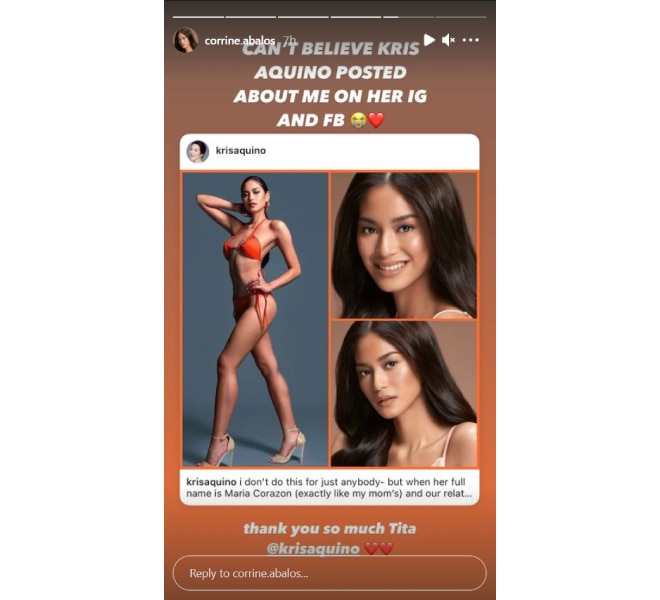 The Miss Universe Philippines 2021 coronation night is set to be held on September 25. Rabiya Mateo, who finished in the Top 21 at the 69th Miss Universe pageant, will be crowning her successor at the event.

The winner will represent the country in this year's Miss Universe pageant set in Israel in December. Currently, there are four Miss Universe winners from the Philippines, namely, Catriona Gray (2018), Pia Wurtzbach (2015), Margie Moran (1973), and Gloria Diaz (1969).