Nadine Samonte revealed in her latest social media post that she almost lost her third baby due to pregnancy complications. 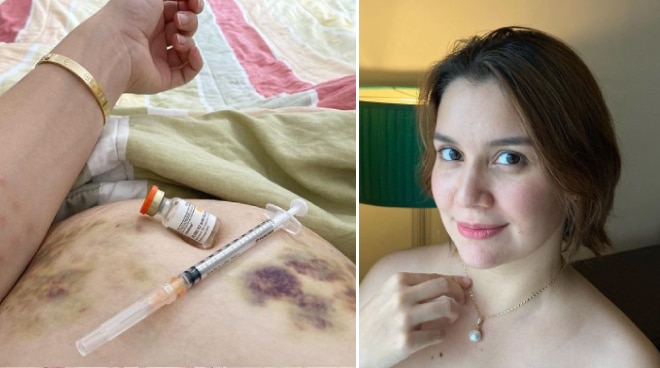 Actress and expectant mother Nadine Samonte revealed in her latest social media post that she almost lost her third baby due to pregnancy complications.

In an Instagram post Monday, July 5, Nadine shared a photo showing bruises on her growing belly, as she opened up about struggling with an autoimmune and hormonal disorder during her pregnancy.

"Every day is a struggle but it's more of a blessing. Feeling my tummy grow every day is what I'm thankful for. Thank you, Lord, for our 3rd baby. Yes, I still have PCOS (polycystic ovary syndrome) and mostly APAS (antiphospholipid antibody syndrome). This journey is particularly different from my 2 kids. We almost lost our baby during my first trimester but with God's grace and Guidance hindi nya kami pinabayaan. God is Good," she said.

PCOS is a hormonal disorder that affects women during their childbearing years. According to website Healthline, PCOS interrupts the normal menstrual cycle and makes it harder for a woman to get pregnant. It also increases a woman's risk for pregnancy complications and miscarriage.

Meanwhile, APAS is an autoimmune disorder associated with the presence of high levels of antiphospholipid antibodies in the blood. APAS, according to the National Heart, Lung, and Blood Institute, is particularly risky among pregnant women, as it can cause pregnancy-related problems, such as multiple miscarriages, a miscarriage late in pregnancy, or a premature birth due to eclampsia.

In her post, Nadine went on to say that while her third pregnancy isn't an easy one, she will never give up on her baby.

"I can say I'm one strong momma here fighting for my babies. Ang dami kong iniyak sa journey na 'to. Hehe. Pero I won't give up EVER! I'll fight and stay strong for them! Go APAS and PCOS mommas out there. Kaya natin 'to!" she said.

She ended her caption by expressing her excitement to welcome her "rainbow baby" —which she said would be her last one—into the world soon.

It was in June when Nadine and her husband Richard Chua shared the exciting news that they're expecting their third baby.

Nadine and Richard, who is the son of former actress Isabel Rivas, have been married since 2013. They tied the knot in a private ceremony in Zambales.