Charo Santos, Daniel Padilla’s ‘Whether the Weather is Fine’ to screen at Toronto film fest

‘Kun Maupay Man It Panahon’ (Whether the Weather Is Fine) starring Charo Santos and Daniel Padilla, will have its North American premier at the Toronto International Film Festival (TIFF). 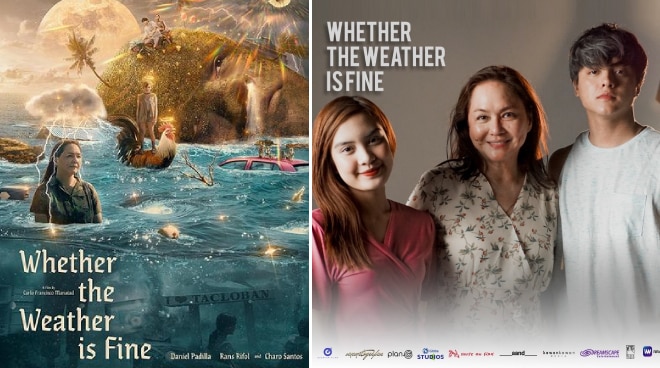 Kun Maupay Man It Panahon (Translation: Whether the Weather Is Fine), the tragic movie starring Charo Santos-Concio and Daniel Padilla, will have its North American premiere at the Toronto International Film Festival (TIFF).

The film will be screened under the festival's Contemporary World Cinema section and is the lone Philippine production in this year's lineup.

The TIFF is taking place from September 9 to 18.

Earlier, it was announced that Whether the Weather Is Fine, which also stars newbie actress Rans Rifol, will compete at the 74th Locarno Film Festival in Switzerland.

The movie is set to make its world premiere via the festival's Cineasti del presente Concorso, or Filmmakers of the Present Competition, which offers a selection of first and second feature films, primarily world premieres, directed by emerging global talents.

Based on its official synopsis, Whether the Weather Is Fine tells the story of a mother and her son, who, in the aftermath of Super Typhoon Yolanda, "struggle for survival and deal with the absurdity of fate, sustained by the hope that they carry, and what is lost and gained."

Charo stars as Norma, "a woman driven by her God and gut". But when the storm ravages her home, a desperate longing for lost love compels her to move against the tides. Daniel plays her son Miguel, "a boy caged all his life by his inner demons". He roams the ruins of his now unlivable city to find the two women in his life: his mother and his beloved Andrea.

Meanwhile, Rans is Andrea, who was born in difficult circumstances, so she knows her way around tragedy already. She becomes Miguel's guiding light as they traverse and prepare to flee the wreck they once called home.

READ: FIRST LOOK: Daniel Padilla as Yolanda survivor in 'Whether the Weather Is Fine' teaser

Whether the Weather Is Fine is directed by Tacloban-born Carlo Francisco Manatad, whose short film, Jodilerks Dela Cruz, Employee of the Month, was nominated at the prestigious Cannes Film Festival in 2017.

The movie is a joint project of Dreamscape, iWant, Quantum Films, Black Sheep, and Globe Studios, with international partner studios from France, Singapore, Indonesia, and Germany.