WATCH: John Prats earns praises after riding truck to get to ‘It’s Showtime’ studio on time

John Prats braved the heavy rains to get to ‘It’s Showtime’ on time. 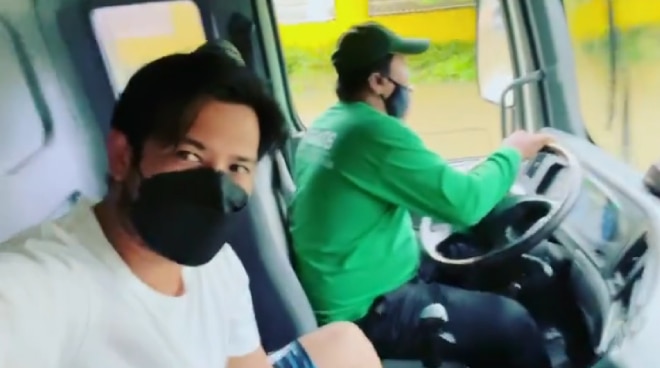 It’s Showtime director John Prats had everyone praising him after he proved his dedication to the long-running noontime show on Saturday, July 24.

Chronicling his journey to get to the studio of It’s Showtime at the ABS-CBN headquarters in Quezon City, the 37-year-old actor-director revealed he was forced to ride a truck.

Set to launch a new segment on the show called “Madlang Pi-Poll,” John said he had to find ways to make sure he made it to the show amid the heavy downpour of rain.

“Madlang Pi-poll” is the latest interactive segment of It’s Showtime which gives contestants the chance to win up to 150,000 pesos. More than 45,000 Kapamilyas joined on its launch.

Apart from netizens, some of the mainstay hosts of the show such as Kim Chiu, Vhong Navarro, and Amy Perez also praised John’s dedication to the show.

John Prats started directing the show earlier this month following an announcement from Vhong Navarro himself.

The FPJ’s Ang Probinsyano actor is no stranger to directing as he has led several concerts and shows in the past including those of fellow Cornerstone Artists like Moira Dela Torre.

Last December, he directed the ABS-CBN Christmas Special which he admittedly had a hard time believing that such an opportunity would be given to him.

Earlier this week, John Prats also garnered praises from netizens after volunteering to help pay for the tuition of a Reinanay contestant’s children.