Meet the characters in ‘Whether the Weather Is Fine’

Get to know the characters played by Charo Santos-Concio, Daniel Padilla, and Rans Rifol in the upcoming drama. 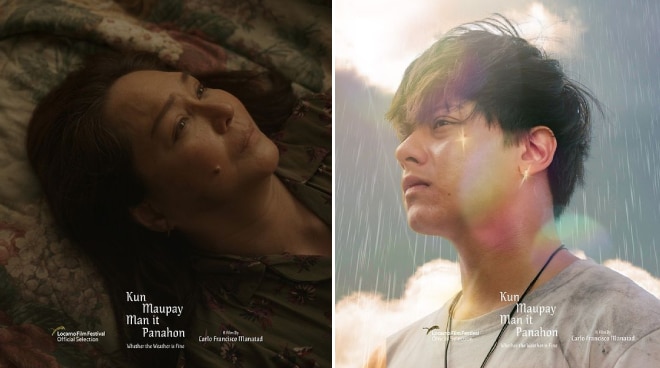 The teasers, which were released on the Instagram page @theweatherfilm, introduce the movie's three major characters—Norma, Miguel, and Andrea.

Norma, played by Charo, is described as "a woman driven by her God and gut". But when the storm ravages her home, a desperate longing for lost love compels her to move against the tides.

Miguel, portrayed by Daniel, is "a boy caged all his life by his inner demons". He roams the ruins of his now unlivable city to find the two women in his life: his mother Norma and his beloved Andrea.

Meanwhile, Rans's Andrea was born in difficult circumstances, so she knows her way around tragedy already. She becomes Miguel's guiding light as they traverse and prepare to flee the wreck they once called home.

Whether the Weather Is Fine, based on its official synopsis, tells the story of a mother and her son, who, in the aftermath of Super Typhoon Yolanda, "struggle for survival and deal with absurdity of fate, sustained by the hope that they carry, and what is lost and gained."

Earlier, producer Black Sheep released the first teaser trailer for the movie. It sees Daniel's Miguel arriving at an evacuation center with Rans's Andrea and lining up to receive relief goods. The clip ends with the actor asking in Waray, "What's going to happen [now]?"

Whether the Weather Is Fin" is directed by Tacloban-born Carlo Francisco Manatad, whose short film, Jodilerks Dela Cruz, Employee of the Month, was nominated in the prestigious Cannes Film Festival in 2017.

It is a joint project of Dreamscape, iWant, Quantum Films, Black Sheep, and Globe Studios, with international partner studios from France, Singapore, Indonesia, and Germany.

Recently, the film was hailed as one of the three winners of this year's Torino Film Lab's Audience Design Fund. In 2017, the project also won the TFL Co-Production Award.

Whether the Weather Is Fine is set to make its world premiere in the Concorso Cineasti del presente of the 74th Locarno Film Festival. The section offers a selection of first and second feature films, primarily world premieres, directed by emerging global talents. The festival will run from August 4 to 14, 2021.