Actress-host Toni Gonzaga surprised her fans and followers with her latest bikini snap, taken during a recent getaway with her family in Boracay. 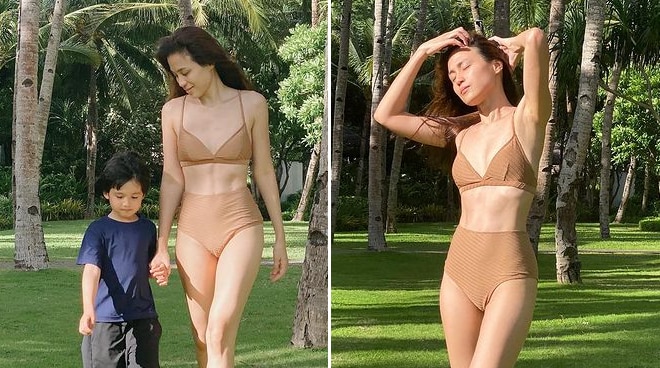 Actress-host Toni Gonzaga surprised her fans and followers with her latest bikini snap, taken during a recent getaway with her family in Boracay.

The photo, which has since gone viral on Instagram, sees Toni flaunting her toned figure in a nude-colored bikini.

"Visualize your highest self and start showing up as her," she wrote in the caption of her post, which already has nearly 375,000 "likes" as of writing.

Among those who commented on her post to express their admiration for Toni were her sister Alex Gonzaga, Angel Locsin, Iza Calzado, Pauleen Luna, Mariel Rodriguez, Loisa Andalio, Isabel Oli, Karen Davila, and Maxene Magalona.

Meanwhile, Toni also shared another photo of herself by the pool, captioned, "Posing for @paulsoriano1017."

Check out more photos from Toni's vacation with her family below:

Just last January, Toni and her family were in Boracay to celebrate her 37th birthday.

Toni and her husband, film director Paul Soriano, have been married for more than six years. They celebrated their sixth wedding anniversary last month.

Their only child, Severiano Elliott or simply Seve, will turn 5 this coming September.