Kylie made the denial in a reply to one of her followers on Instagram who asked if it was true that Aljur left her because she's "high maintenance" and that she has a lot of rich and celebrity suitors, one of them being JM.

"'Yun po kasi ang sabi ni Xian Gaza eh," the netizen said, referring to the businessman who made headlines in 2017 after asking out actress Erich Gonzales with a billboard ad in Manila.

Responding to the netizen, Kylie said: "Magkaibigan lang kami ni JM. This is not true." 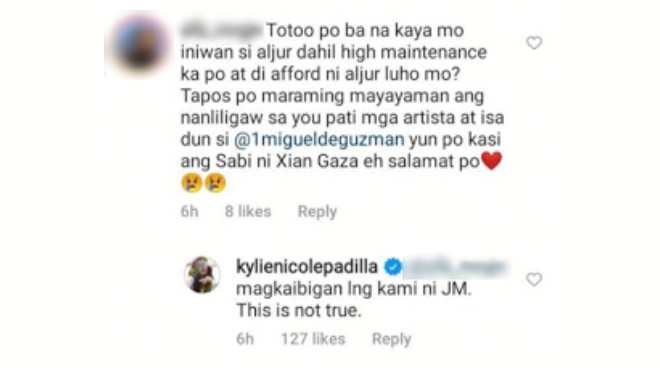 Kylie recently separated from Aljur, her husband of more than two years with whom she has two sons.

It was her father, action star Robin Padilla, who confirmed their split in an interview with Ogie Diaz.

In the wake of his separation from Kylie, Aljur was romantically linked to his former Sandugo co-star Maika Rivera and Nerisa leading lady Cindy Miranda, but both have denied involvement in the split.

Meanwhile, in an official statement she issued to GMA News, Kylie asked the public for "respect", as she talked about going through the process of "healing and moving on".

“Every family goes through a lot of challenges and sometimes we think that it is only the couple that goes through the ordeal. We forget the kids and people that are involved. In the past months, our family has gone through the process of recovering, healing, and moving on," she said.

"All we need right now is respect—first and foremost on the decisions we have made as a family and respect for each and every member of our family—to Aljur who is the father of my two wonderful boys, most especially to Alas and Axl who are at this point very fragile, and to our families from both sides who have guided us along the way," she added.