Actress Kris Bernal and her fiancé, chef and businessman Perry Choi, looked very much in love in their prenuptial shoot released in time for their initial wedding day. 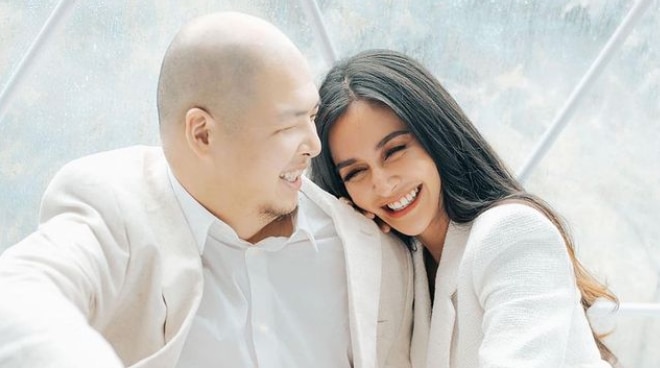 Actress Kris Bernal and her fiancé, chef and businessman Perry Choi, looked very much in love in their prenuptial shoot, released in time for their initial wedding day.

On Instagram, Kris gave her followers a glimpse of the engagement shoot, which was shot by Nice Print Photography at Domescape, a glamping site in Nasugbu, Batangas.

"We were supposed to get married today! I remember it was April, when a sudden surge in COVID-19 cases happened and it reached around 12k or 15k a day so we decided to move our wedding instead. After careful consultation with our families, friends, and suppliers, it’s with deep sadness and heavy hearts that we had to move the wedding to a later date because of the coronavirus surge," she added.

Kris recalled getting so emotional that day, saying postponing her big day was one of the toughest decisions that she has ever had to make.

"Nonetheless, the important thing is, the wedding is not entirely cancelled but moved to a later date and prioritizing the safety of everyone above anything else," she said.

Kris, 32, got engaged to Perry in February 2020, during his birthday bash which the actress herself organized. At the time, the couple had been dating for more than three years.

According to Kris, getting engaged to her boyfriend was the best thing that happened to her in 2020.

"I learned to appreciate life in a positive way and do things for myself and not the viewpoint of others. I began to cherish each and every small thing or moment in my life," she said.

She also shared an important life lesson she learned from her fiancé.

"The best things in the world are not in the material objects that one can buy from the store, but in the memories we make with the people we love," she added.