Actress and psychology student Jodi Sta. Maria happily shared over the weekend that she has passed her final thesis defense and will be graduating soon. 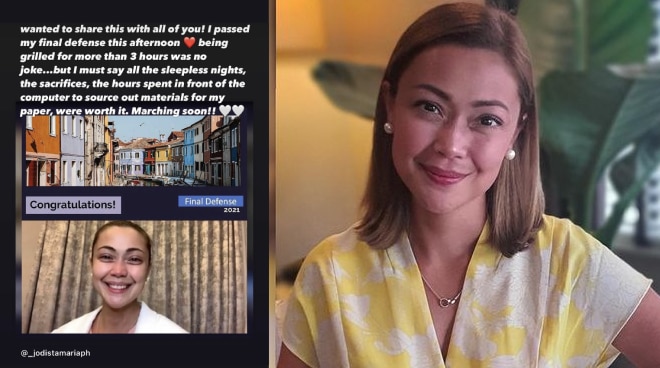 Actress Jodi Sta. Maria happily shared over the weekend that she has passed her final thesis defense and, hence, will be graduating soon.

Through an Instagram Story update, Jodi, who is currently enrolled in the B.S. Psychology program of Southville International School and Colleges, shared a photo of herself from her virtual thesis defense last Saturday, June 5. In its caption, she wrote: "Wanted to share this with all of you! I passed my final defense this afternoon. Being grilled for more than 3 hours was no joke, but I must say all the sleepless nights, the sacrifices, the hours spent in front of the computer to source out materials for my paper, were so worth it. Marching soon!!"

She followed her post with a tweet thanking all those who prayed for her and sent her messages of encouragement.

"I want to thank everyone who prayed for me and those who sent messages of encouragement. Maraming salamat! Malapit na ang graduation!" she said.

It was in 2017 when Jodi revealed that she had returned to school to pursue a Bachelor of Science in Psychology degree.

In a previous interview, Jodi said she plans to obtain a Master's degree once she's finished her undergraduate studies.

Jodi, 38, is set to star in the upcoming ABS-CBN drama The Broken Marriage Vow.

The much-awaited Philippine adaptation of the original BBC Drama Doctor Foster also stars Zanjoe Marudo, Sue Ramirez, and Zaijian Jaranilla. It will be directed by Concepcion Macatuno, who is known for her films Glorious and Malaya.