Pepe Herrera and Aicelle Santos headline PETA’s long-running musical ‘Rak of Aegis’ this year as it holds virtual performances in July and August. 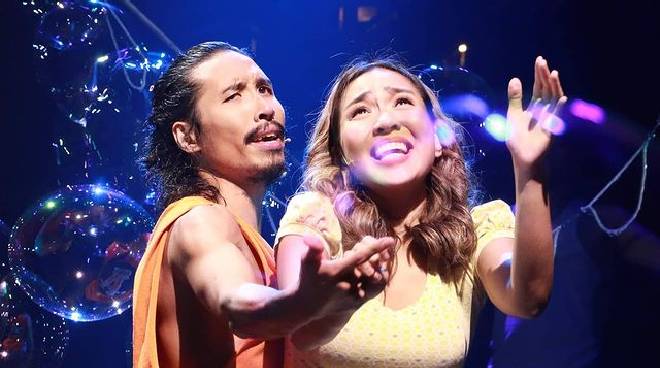 Seven years after it was first staged at the Philippine Educational Theater Association (PETA) theater in Quezon City, the popularity of original local musical Rak of Aegis continues to uplift and entertain Filipinos as the longest-running original Pinoy musical in contemporary Philippine theater. In light of the pandemic, PETA will be streaming Rak of Aegis starting July 31 with this year’s cast headlined by theater veterans Aicelle Santos and Pepe Herrera.

Aside from lead characters Aileen (Santos) and Tolits (Herrera), other members of the cast include Poppert Bernadas as Kenny, Isay Alvarez-Seña as Mary Jane, Robert Seña as Kiel, Joann Co as Mercy, Jimi Marquez as Jewel,  Gie Onida as Fernan, as well as ensemble members Teetin Villanueva, John Moran, Matel Patayon, Marynor Madamesila, Lemuel Silvestre, and Rafael Sudayan. As one of the first Filipino productions which ushered in the trend of jukebox musicals and gave birth to a newfound appreciation for theater and original Pinoy music, Rak of Aegis features the classic songs of iconic Pinoy rock band Aegis.

After being closed for more than a year now, PETA faces financial challenges that has brought about the launch of the #TakePETABeyondCovid campaign, a fundraising drive that aims to augment the loss of its 2020 season and raise funds for its immediate future.

Streaming 8pm-11pm on the date of your choice

Streaming for 24 hours starting at 10 am on the date of your choice plus VIP access to concert on August 8, 2021 at 8 pm

There will also be a Rak With Aegis VIP Concert on August 8 at 8 pm featuring The Aegis band with a special performance from the Rak of Aegis cast.