Heart Evangelista’s mom praises actress’ marriage to Chiz Escudero: ‘You allow each other to grow’

In Heart Evangelista's latest vlog, her mother, Cecile Ongpauco shared what she likes about the marriage of her daughter and Sorsogon Governor Francis ‘Chiz’ Escudero. 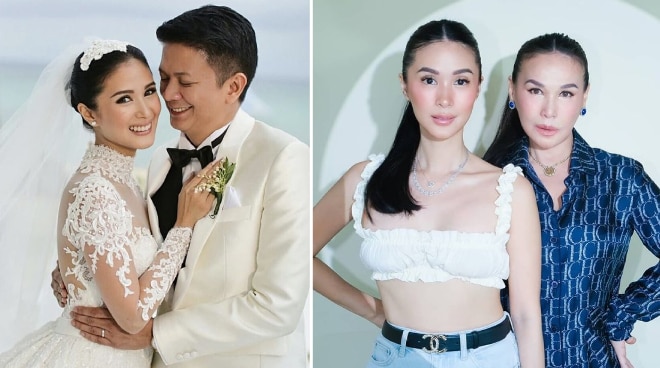 Cecile Ongpauco, the mother of Heart Evangelista, made headlines eight years ago when she publicly expressed her disapproval of the actress's engagement to her then-boyfriend, Sorsogon Governor Francis "Chiz" Escudero.

So fans of the actress were surprised when her mother, in a rare moment, publicly showed support for their marriage, as seen in Heart's recent YouTube vlog, which also featured her sister Camille.


At one point, Heart asked her mother what advice she would give to her and Chiz regarding their marriage.

"You're fine, you're happy," a smiling Cecile replied.

Heart's mom then praised Chiz as a husband, as she shared what she likes about their marriage.

Addressing Chiz, Cecile said: "You know what I like about your marriage? You allow each other to grow. You don't stunt her growth."

"You don't cramp her style. I think that's what's good about their marriage. He allows her to grow, mature on her own," she added.

Just last April, Heart delighted her fans when she gave a glimpse of her father, Rey Ongpauco, and her husband finally getting along in her latest vlog.

"I told you, if you do everything right, and you pray a lot, time heals everything," the actress was quoted as saying in the vlog.

When they tied the knot at the Balesin Island Club in February 2015, neither of the actress's parents was present. Both Ongpaucos publicly disapproved of the Sorsogon Governor for their daughter over him supposedly being disrespectful and an alcoholic.