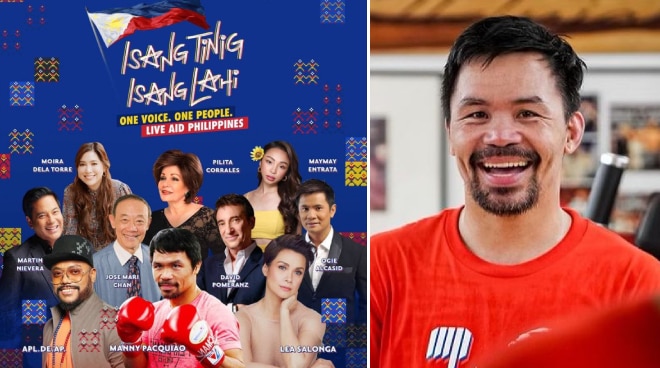 During the Isang Tinig, Isang Lahi - One Voice, One People presscon held last June 17, Manny Pacquiao shared why the event was a much-needed help in these trying times.

He said, “The COVID-19 pandemic has led to a traumatic loss of human life. Most of the casualties are either our loved ones, friends, and people we know. We saw in our very own eyes the unprecedented challenges. This pandemic affected each and every one of us. The economic and social destruction brought by the pandemic is devastating. Millions of people fell into extreme poverty, joblessness, and hopelessness.

“Since March last year or 15 months ago, I went to places to extend whatever help we can. The Manny Pacquiao foundation in partnership with the Jack Ma foundation and some friends were able to raise around one billion pesos. These funds were used to buy PPEs, medical equipment, donated to private and public hospitals, relief and financial assistance were distributed to around 100,000 families affected by the pandemic and calamities.

“I personally saw the impact of the pandemic and series of disasters int he lives of our countrymen in different places. What really inspired me is the indomitable and bayanihan spirit of the Filipinos. Rich and poor, giving whatever they have to help.”

Aside from looking forward to performing his own songs “Lalaban Ako” and “Para Sa ‘Yo,” Manny hopes the event can provide inspiration and happiness to Pinoys worldwide.

ABS-CBN as the official media partner will present the concert live via KTX simulcast on iWant TFC with delayed telecast on Kapamilya Online.

Presented by the CBCP Caritas Filipinas Foundation, Inc. the Isang tinig Isang Lahi concert is free to all who wish to watch. It will have a simultaneous donation-drive for the benefit of Caritas Philippines projects for the impoverished communities, the Caring Hearts Foundation, Inc. in the US, PGH Medical Foundation, Inc., Tuloy Foundation, Inc., ABS-CBN Foundation, Inc., Philippine Relief and Development Services, Inc. and Volunteers Against Crime and Corruption (VACC.) In addition, Shopee will be joining in the fund-raising efforts through its Special Edition Bayani, Kabalikat and Kaibigan Donor Cards.