Mo Twister gets married in Iceland, calls it ‘insanely romantic’ 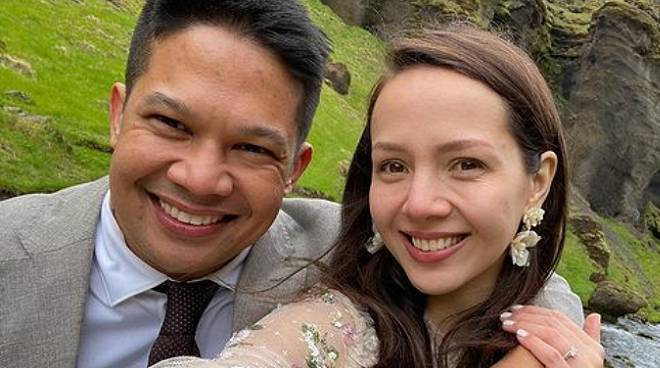 After leaving the Philippines to move back to the US in 2012, radio DJ and podcaster Mo Twister (real name Mohan Gumatay) has finally tied the knot with longtime partner and former Magic 89.9 DJ Angelicopter (real name Angelika Schmeing). The Good Times with Mo creator shared the happy news on his Instagram account last June 15 while their family was vacationing in Iceland.

READ: PUSH X LIFESTYLE: Mo Twister is living the life in the US as a dad of 3

He wrote, “Here’s a tip about getting married in a far away wilderness like Iceland. Have not one but two backup plans  for the second time we have been here together, things we had scheduled a long time ago were cancelled by weather. We had some extreme weather that made us have to completely overhaul the entire day. Where we scheduled to have our ceremony, changed due to a summertime snow storm. Angelika’s wedding dress was ripped by the weather and the elements. My clothes drenched. We moved to several locations, the kids nearly froze to death, they had to stay in the hotel cuz they just couldn’t handle the weather any longer, then like a miracle, we found a bright, calm and SUNNY spot wherein it ended up with just the two of us. Insane and insanely romantic. It was incredible. Our amazing videographer didnan awesome job leading the way. And yay! I get to finally wear a wedding ring!! I love you @angelicopter, no wedding hashtag.”

READ: EXCLUSIVE: Mo Twister gets engaged to Angelika Schmeing after eight years: ‘I knew Angelika was ‘The One’ many years ago’

Mo surprised Angelicopter with a proposal on air during an early morning Good Times With Mo episode last year. The couple have been together for six years and have a daughter together named Amsterdam. Mo and Angelika are currently based in Las Vegas along with Angelika’s son Lucas from a previous relationship. Mo also has a daughter named Moira with former actress Bunny Paras.