Catriona Gray wants this young artist to play her in biopic

Former Miss Universe Catriona Gray says she would love to see this young artist portray her life story in a movie. The former Miss Universe named the daughter of celebrity couple Jessa Zaragoza and Dingdong Avanzado when asked which artist she would like to play herself in a biopic in a recent interview with Metro.Style editor-in-chief Geolette Esguerra for "Metro Chats".

"She popped into my head because literally I had an interview with her kanina... Si Jayda," said Catriona. "She just turned 18. She's your cover girl. And I worked with her for 'SNL' (Sunday Noontime Live)."

The Filipino-Australian beauty went on: "She's so incredibly talented as a vocalist. And she also is such an old soul like me. And she's also an only child, right? So we have that in common. So yeah, I think Jayda."

Obviously touched by Catriona's kind words, Jayda reposted the clip on her Instagram Story and captioned it with a pleading face and red heart emojis. 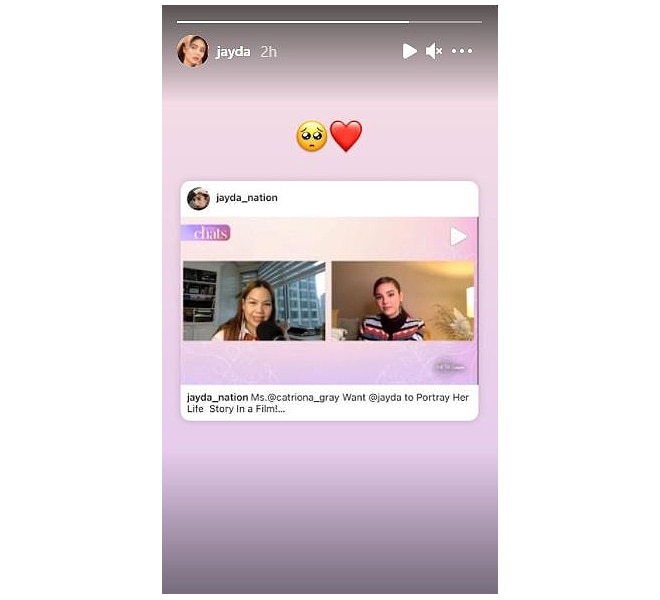 Jayda, who turned 18 this month, has made a name for herself in the music industry with her hit songs such as "Happy For You" and "M.U. (Malabong Usapan)."

Last February, she made her acting debut through the music video for her single "Paano Kung Naging Tayo?"

"It is more than learning the lines," she said, when asked how she sees acting now after the learning experience. "[It is] more than the technical things. It makes you discover more about yourself.”

Currently, Jayda is gearing up for her much-awaited concert, simply titled Jayda In Concert.

A joint production of ABS-CBN Events and Phenomenal Entertainment, the concert will be held on June 26 at 8 pm, with a rerun on June 27 at 10 am. It will be directed by Frank Mamaril with Iean Iñigo as the musical director.

Tickets are available on KTX.ph, iWantTFC, and TFC IPTV. VIP tickets cost P799 each and are only available via KTX.ph, while regular passes are worth P499 each. Premium ticket holders will also have the chance to attend a Zoom party with Jayda on June 26.