Donny Pangilinan took to social media to greet his onscreen partner Belle Mariano as she turned 19 on Thursday, June 10. Donny Pangilinan took to social media to greet his onscreen partner Belle Mariano as she turned 19 on Thursday, June 10.

In an Instagram Story update, Donny shared a throwback photo of himself and Belle, notably with the actor's arms around her. 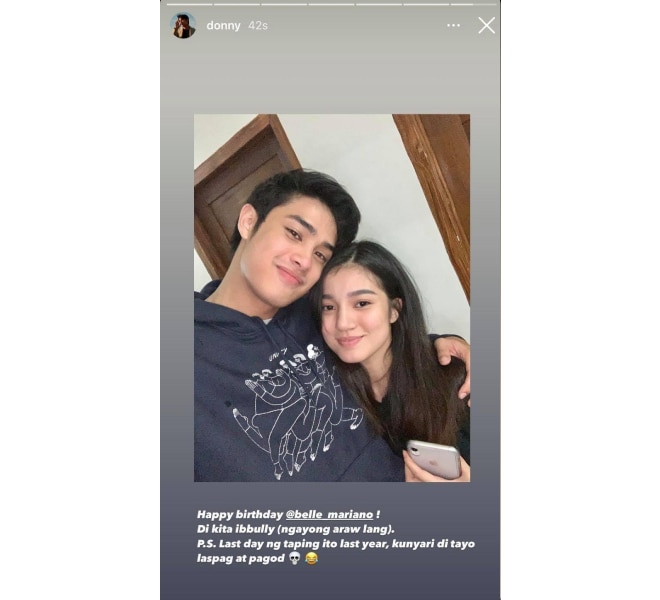 According to Donny, the snap was taken during their last day of taping last year, for the ABS-CBN series He's Into Her. Donny and Belle, or "DonBelle", as their onscreen tandem is known to their fans, are the lead stars of He's Into Her, which is based on the books by Maxine Lat.

The 10-part romantic-comedy series marks the first time that the two are working together. In a previous interview with PUSH, Belle said she was delighted to be working alongside Donny.

"Natuwa ako kasi I know how passionate Donny is when it comes to his work, and mas nakita ko pa yun nung nag-shoot kami,” she said.

The actress, however, admitted that there was a lot of awkwardness between them on their first day on the set working together.

“Nung una natatakot ako lumapit sa kanya kasi feeling ko hindi ko siya makausap, ganyan. Pero sobrang opposite. Sobrang approachable niya and he’s so nice. And during the shoot, like what he said to me, it takes time for him to open up din. Hindi pa kami masyado nag-uusap nun. Pero nung nagkaroon na ng lock in [taping] tapos nung nag third lock-in dun na talaga, sobrang easy to work not just with him but with the whole cast,” she recalled.

Directed by Chad Vidanes and produced by Star Cinema, He's Into Her is available on iWant TFC, as well as Kapamilya Channel, Kapamilya Online Live, A2Z Channel 11, and TFC.