Yassi Pressman, who recently turned 30, went to the Philippine General Hospital to visit the babies at the neonatal intensive care unit and to make her donation to the state-run hospital. 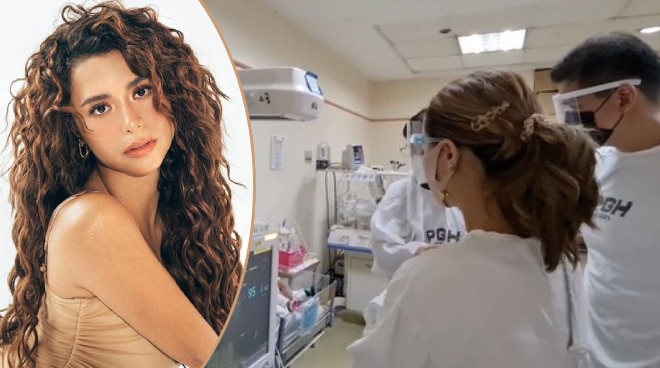 Yassi Pressman admitted to having a renewed appreciation for doctors, nurses, and staff of the Philippine General Hospital after visiting the state-run hospital which was recently hit by a fire that damaged a portion of its facility and displaced its patients.

The Kapamilya actress, who recently turned 30, went to PGH last May 22 to personally visit the babies at the neonatal intensive care unit (NICU) and to make her donation to the hospital, she revealed in an Instagram post over the weekend.

"On May 16, 2021 the Philippine General Hospital was hit by a catastrophic fire which destroyed medical equipment and put people’s lives at risk, especially the babies in the NICU on the floor directly above the fire," Yassi began her post.

"Last Saturday we took the time to visit PGH. The hospital was in dire need of help," she said. "Coming to PGH made me deeply appreciate all the nurses, the volunteers, the staff and the mission of the hospital. 80% of the patients that are checked in, are taken care of for free. They perform close to 30,000 surgeries a year charitably."

Yassi said she was heartbroken seeing all the infants who were affected by the fire. She also said she salutes those who risked their lives to rescue the babies from the burning building.

The actress then encouraged her followers to also donate to PGH, which she said is in need of milk donations, ready-to-eat food, bottled water, bed sheets and blankets, and pillows.

"Sana po matulungan pa natin ang PGH," she said. "For any donations in kind, kindly drop them off at PGH, and for cash donations please address them to PGH Medical Foundation Inc."

Aside from Yassi, celebrities who have extended help to PGH following the incident include actress Anne Curtis and hosts Karla Estrada and Iya Villania.