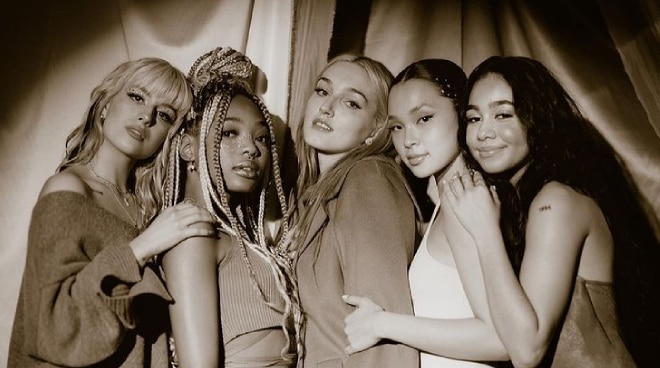 “It took me a month and a half to even reply because a random person just hit my DM, you don't even know who it is. I don't want to get kidnapped. Obviously, things are meant to be now. It was insane, to be honest,” kuwento niya.

“I had singing in my genes. My grandma is actually a professional singer. Right when I moved to California from the Philippines in 2007, I was about five years old. Every Friday she'd have gigs and I’d go with her.

“I grew up really just singing with my grandma. I actually sang in the talent show in high school every year and I won every year. I don't want to do anything else, but sing. I feel really passionate about it and we all are,” she said.

Paliwanag ni Queenie, “It's just so ironic. There are five girls, but it’s a boys’ world. We were just thinking that boys would be cute at first, and then we realized boys was an acronym for ‘Best Of YourSelf.’ The ‘world’ part for us just makes it global.”

“Yeah, some say we kind of resemble the Spice Girls. That was not on purpose! It's weird how it worked out. They were iconic and everybody loved them. It’s really a compliment to resemble them in a way,” sabi ni Lilian.

“When people compare us to girl groups like Spice Girls, I feel like they're manifesting success for us. But we'll be successful in our own way,” dagdag naman ni Queenie.