Roxanne Barcelo posted a kissing photo with her husband whose face was covered with a big panda emoji. 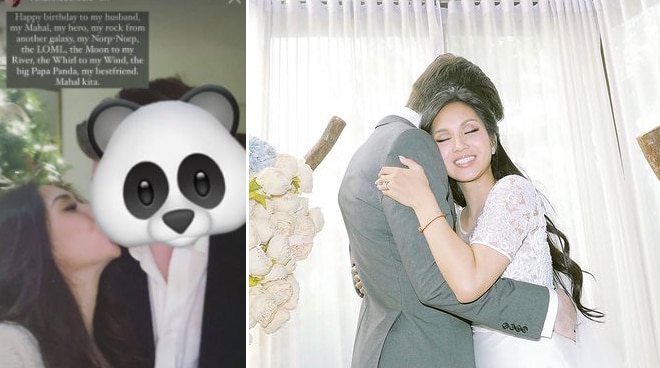 Roxanne Barcelo took to social media to greet her husband as he turned another year older on Wednesday, May 26.

Through an Instagram Story, the actress posted a kissing photo of herself with her husband, notably with his face covered with a big panda emoji.

In her caption, Roxanne wrote: "Happy birthday to my husband, my Mahal, my hero, my rock from another galaxy, my Norp-Norp, the LOML, the Moon to my River, the Whirl to my Wind, the big Papa Panda, my best friend. Mahal kita." It was back in December when Roxanne, 36, made a surprising revelation that she is now married, without revealing the identity of her husband.

Nevertheless, in a previous interview with Toni Gonzaga for I Feel U, the actress revealed that her husband is not a Filipino.

According to Roxanne, refusing to reveal her husband's identity is her way of keeping something to herself after sharing “too much” to the public.

“Alam naman ng lahat ng tao na I like to share too much. I always like to share. But this time, I really have to respect his decision to stay private. I’m hoping one day dahan-dahan na pwedeng kahit boses man lang, pa-'Big Brother' ang peg," she said, in jest.

In late January, Roxanne shared the exciting news that she and her husband are expecting their first child—a baby boy.

Just early this month, Roxanne made headlines after photos from her maternity shoot were released by lifestyle magazine Mega in time for Mother's Day.